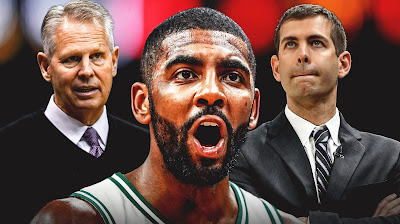 While the 2018-19 Celtics will go down as one of the great mysteries in Boston sports history, the only thing that remains consistent from last season was that Kyrie Irving was not happy for most of it.

Despite Irving having the best statistical season of his career during the 2018-19 campaign, the Celtics, who were favorites to come out of the Eastern Conference, underachieved and finished as the fourth seed before losing to the Milwaukee Bucks in five games.

If what MacMullan's saying holds up to be true (so far the timeline checks out), Irving, who in October told Celtics season ticket holders that he planned to re-sign in Boston, only to become unhappy a couple of months later, which ultimately led to him taking his talents to Brooklyn to team up with Kevin Durant.

Last week Ainge admitted that before the start of the NBA playoffs he felt Irving was leaning towards leaving.


"I think I had a pretty good idea in March or April," Ainge said after the introductory press conference for Kemba Walker and Enes Kanter. "Not for sure, though. Not certain. But I was obviously thinking about moving in a different direction at that point. Thinking of the different options."

Though the Celtics have moved on rather quickly by signing another All-Star point guard in Walker to replace Irving, the 'what-if's' will linger around last year's roster. Despite the many changes already made for the upcoming season, Boston should remain a top-four team in the East, even if on paper they seem less talented than last summer.