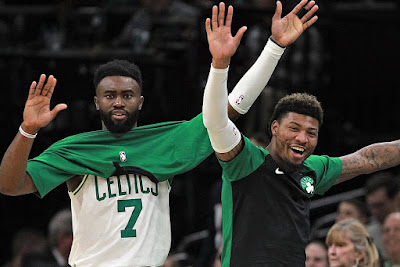 Team USA could feature four players from the Celtics, when the final 12-man roster is selected to head over to the FIBA World Cup in China next month.


Brown will be the fourth Celtic invited (the most of any NBA team), as it was announced Monday that Marcus Smart also got the nod, along with new teammate Kemba Walker and Jayson Tatum will all get a shot to display their skills on an international stage.


"You've just got to go about your business and, if the phone rings, be ready to go," Colangelo recently said of Brown. "But we have a lot of respect for him as a player."

Tobias Harris is the latest to withdrawal from Team USA duties, as training camp will begin in the next few week before the start of the FIBA World Cup on August 31.

Here's a look at the updated invitees as of Tuesday: