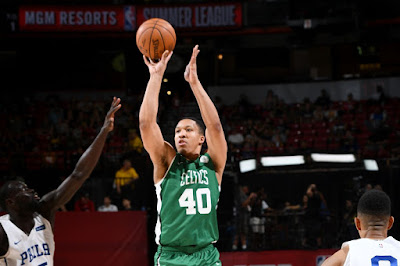 The Celtics' Summer League squad debuted on Saturday with a 98-82 electrifying victory over the 76ers.

Once the shots started falling you could instantly see the team chemistry unwrap itself like a beautiful present for all of Celtics Nation to see and enjoy as there were many great things that happened in the game. It made it easier to notice the parts of the team that still needs work.

First thing's first -- even if it was predictable -- Guerschon Yabusele was a huge disappointment. In 16 minutes of play (which included him starting), he finished with a terrible performance that consisted of missing four shots and contributing to one assist. There were times I noticed him under the basket and it looked like he was struggling to gain control of his dribbling.

Yabu needs to play better, otherwise, he is going to Maine and Onuaku Chinanu can take his spot. Having one year under his belt gave Robert Williams the confidence he needed to move forward in the NBA.

In his Summer League debut, he provided 9 points and 9 rebounds in 19 minutes. Williams was pretty impressive all around as we saw a small sample size of the athletic center from last season. With more minutes hopefully being distributed his way this season, Williams can provide solid performances on a nightly basis.

The talk of Carsen Edwards becoming good NBA shooter is accurate. The standout rookie finished with a game-high 20 points and was electric from the start of the game until the final buzzer.

He creates separation for himself at an impressively high rate. Edwards is going to provide instant offense for the Celtics as well as playing solid defense on the other end.

Out of all the rookies, there's a particular high level of anticipation around Grant Williams and what he is going to provide for the Celtics. The two-time SEC Player of the Year contributed to 12 points, 6 rebounds and a pair of assists in 20 minutes against the Sixers.

He also connected on 2-of-4 from behind the arc, Williams showed that he can space the floor and add a smooth shot (along with a floater) to his repertoire. He has the potential to become a starter at some point during the regular season for Brad Stevens -- the guy is a monster in the paint and a true leader both on and off the court.

Last but not least, Tacko Fall was the most popular player in all of Summer League on Saturday. Every time he stood up for the bench the crowd erupted in 'TACKO' chants and coach Morrison gave the fans what they wanted by eventually inserting him into the game.

Fall put up six points, shot 75 percent from the field and added one block in 10 minutes. Fall controlling the paint is going to be a true force for the Celtics.

During the second quarter, there were four defenders around Fall and he was still able to get a putback dunk in. It is going to be fun to see Fall's impact.

Celtics should be happy with what this team has come to be, considering what they went through last season. This Summer League team is a roster full of players that are eager to make an impact during the regular season.