Marcus Smart to join Kemba Walker on Team USA, Jaylen Brown could be next 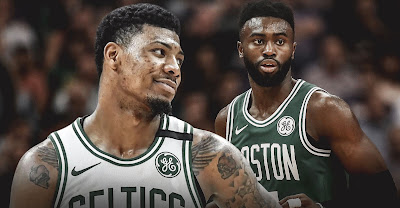 A few Celtics' players will have the opportunity to possibly represent Team USA on the international stage at the FIBA World Cup, which will take place in China from August 31 to September 15.

On Monday Marcus Smart was the latest addition to the training camp roster, as he'll join teammates Kemba Walker and Jayson Tatum next month, according to Shams Charania of The Athletic. While NBA stars Anthony Davis and James Harden recently decided to decline their Team USA commitments, along with Eric Gordon, C.J. McCollum and Bradley Beal.


Walker, the Celtics biggest offseason signing, is only one of four NBA All-Stars that will have a shot of making the final 12-man roster that's heading to the FIBA World Cup.


Amid a flurry of roster withdrawals, at least two NBA All-Stars -- Kemba Walker and Khris Middleton -- intend to stick with Team USA this summer for the @FIBAWC in China from Aug. 31-Sept. 15, league sources say
— Marc Stein (@TheSteinLine) July 22, 2019


Jaylen Brown is also reportedly on a 'short list' to replace those that have dropped out, along with D'Angelo Russell and Aaron Gordon. Tatum got his invite last month, as training camp will begin in early August.

The rest of the invitees that will join Walker, Smart and Tatum include Damian Lillard, Donovan Mitchell and Kyle Lowry, for guards, while the forwards are Khris Middleton, Tobias Harris, Harrison Barnes and P.J. Tucker. The bigs heading to camp are Kevin Love, Andre Drummond, Myles Turner, Kyle Kuzma, Paul Millsap and Book Lopez.


I love playin don’t matter where. But playing for @usabasketball is somethin I’ve been a part of for a while. I take it serious & am 🙏🏾 to even be thought of. ☘️ is everything to me. But to wear 🇺🇸 means the world to me. To do it w my teammates @KembaWalker & @jaytatum0 is 🔥 🔥
— marcus smart (@smart_MS3) July 23, 2019


Other Celtics' players that plan to suit up for their countries next month are Daniel Theis for Germany, Semi Ojeleye for Nigeria and Vincent Poirier for France.