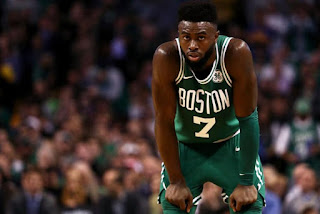 A big question surrounding the Celtics, and its fanbase, is if Jaylen Brown has proved his worthiness in Boston to earn himself an extension, or more preferably; a max-contract offer from the Celtics.

Heading into his fourth year with the team, Brown is entering the final year of his rookie deal. Coming into this season, the Celtics added depth to their roster, especially through the draft. Carsen Edwards has shown spurts of elite shooting, Grant Williams is a powerhouse prospect, and Tremont Waters has shown potential on both ends of the floor.

If these rookies continue to progress in the direction Danny Ainge hopes for, does Brown become the odd man out? If you ask Celtics fans about Brown's contract, they would teeter on both sides of the fence.

One side is itching to give Jaylen a contract extension, at the very least. The other side of the fence is in on using Brown until the trade deadline in exchange for better complimentary role players or even a future draft pick.

Personally, I think Brown is the best role player on this Celtics team but he needs to perform that way; even more so as a starter. With the team changing this off-season and Brown expected to be the starting two-guard, he will need to play at the level he did throughout 2017-18.

However, I do not think the Celtics could get a better return on their investment by trading Brown. I think we still cling on the effort we saw out of a younger Brown during the 2018 playoffs alongside Scary Terry.

Knowing last season was a bit of a setback; not only for the team, but for Jaylen, as well, Brown handled the situation with the utmost professionalism that the Celtics could have asked for. He accepted his new role and eventually thrived in it.

Averaging 13 points, 4.2 rebounds and 1.4 assists, Brown was one of Brad Stevens' most consistent options last season. Only starting in 25 games, he was able to match his field goal percentage to what he produced in 2018 (.465) -- as impressive as that is, it's still not enough to be a sure lock for a max deal in the foreseeable future.

There is no doubt about it that Jaylen is a superb NBA athlete. Still, Ainge is going to use the first portion of the season as his reality check of this current Celtics team, and then plan accordingly from there.

Ainge has been known for always making the necessary moves to benefit the state of the Celtics both for the present and future. It's been no secret that Brown has been a hot commodity since entering the league in 2016, and has been the nucleus of Celtics trade rumors.

If Ainge finds the right offer for Brown, it's hard to believe he will hesitate to pull the trigger. At this point for the Celtics, Brown is now part of the core of Stevens' system. I think we learned with Kyrie Irving that not just any particular All-Star can be added to a roster and mesh perfectly with the team.

With that being said, we're still left wondering what the Celtics should do in regards to Brown. I'm still unsure if Brown is a max contract type of player for Boston. I think a handful of teams around the league would gladly give him a four-year max deal right now, except the team he currently plays for, it will be reluctant.

The Celtics love Brown, but they'll love him more on a team-friendly deal. I'm leaning towards seeing him earn an extension but not at the player-max.

He will make his money and be positioned to win with a championship-contending team, if a team-friendly deal is enough to keep him around. What more could anyone want?

Brown is a great player that could turn any franchise around. A team with many assets that come to mind is the Oklahoma City Thunder. Maybe there's a package to be made that would send Brown to OKC in exchange for future draft picks.

I find it hard to believe that Ainge would send Brown anywhere without an immediate return of a player that could help the Celtics right now, unless he is that confident in his rookie class.

Meanwhile, Brown has shown no signs of being unhappy or unneeded in Boston, but he wouldn't let it show if that were the case anyways. He loves playing basketball and he doesn't give anyone the sense that it would matter to him where he's doing it.

We can't forget that Brown was a key factor in Kemba Walker choosing Boston. He's also the youngest player on the board of NBAPA -- it says something about the type of person Brown is and that is something that definitely should be valued.