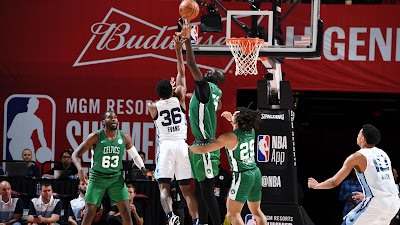 With a perfect 4-0 record, the Celtics will enter the NBA's Summer League tournament as the top seed, following a 113-87 win over the Grizzlies.

Behind a well-balanced attack, Boston put a explanation point on the end of a four-game winning streak with a 26-point blowout win, led by terrific performances from Grant Williams, Robert Williams, Carsen Edwards and Tacko Fall. Williams' 21 points led the Celtics as he caught fire from deep and put on a shooting clinic.

He finished 6-of-10 from the floor, including 4-of-5 from behind the arc. Williams also earned trips to the free-throw line (5-of-8) and pulled down 7 rebounds.

The Celtics leaned on his leadership on both ends of the floor, and after telling reporters that he had been spending extra time on his outside touch, we got a glimpse of the kind of player he can potentially become in due time. Williams also finished with a plus-25 game rating.

Edwards also scored the majority of his points from deep -- where he netted three from behind the arc. And Williams, the second-year big man who's vying for a spot in Brad Stevens' player rotation next season, had his best performance of the summer.

He only needed 20 minutes to complete a 16-and-16 night. Even Williams himself was surprised he managed to pull down 16 rebounds to match his point total, confessing after the game that he had never seen himself rebound that well before.

Fall delivered for fans chanting "TACKO... TACKO... TACKO" throughout the night and received the loudest cheers of the week after each one of his four blocks on one end and loud dunks on the other. He added 12 points and 8 rebounds to his impressive stat line.

Celtics will have a rematch against the same Grizzlies team Saturday at 4:30 EST in the opening round of the Summer League tournament. ESPN will be carrying the game.