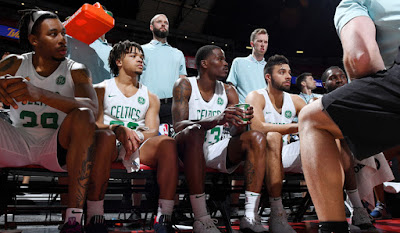 Undefeated Boston could not put away the Grizzlies for the second straight game at Thomas and Mack Center in Las Vegas. Memphis eliminated the top seeded Celtics from NBA Summer League play in a 94-88 quarterfinals loss on Saturday.

The Grizzlies, who had 30-15 second quarter swing and never trailed after that, bounced back from a 26-point loss from Thursday night against the Celtics.

Tremont Waters, whose father passed away two days prior, suited up and made himself available to play in front of family members that were in attendance. Waters showed resiliency given the circumstances, as he finished with 16 points and 3 assists.

Carsen Edwards led all scorers with 25 points (6-14 from 3) and 8 rebounds, while Javonte Green added 17 points and 6 rebounds.

Memphis' starting frontline controlled the paint early and often scoring and rebounding, as both second year big man Bruno Caboclo and rookie Brandon Clarke combined for 27 points and 22 boards for the Grizzlies.

Boston shot 36.7 percent overall from the floor and went 11-of-38 from behind the arc. The Grizzlies hit 14 of their 39 attempts from the 3-point line and shot nearly 45 percent from the field.

Memphis, who will face the Pelicans in the semi-finals, took advantage of the Celtics late game mistakes, as Boston got within a point in the final frame.

Despite the Celtics' comeback falling short, they concluded their summer league play with a record of 4-1.