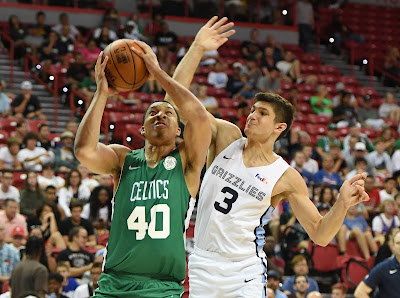 Celtics rookie Grant Williams is quickly making a name for himself.

The No. 22 pick has been a pest for opposing frontcourts on the defensive end of the floor, where he's physical and tough -- his approach got the best of Grizzlies guard Grayson Allen Thursday night. Allen earned his second flagrant foul in the third quarter when Williams hit him with a hard -- but legal -- backdoor screen before getting the ball and attempting an easy layup.

Allen overzealously hit Williams with a hard foul. Williams started making his way towards Allen before players got in between and the Celtics rookie big man smirked as the officials reviewed the play before hitting Allen with his second flagrant, resulting in an ejection.


Grayson Allen was ejected after a flagrant foul for taking a swipe at Grant Williams. Allen was also called for a technical foul earlier in the game.#NBASummer pic.twitter.com/H87mCHAyzk
— SportsCenter (@SportsCenter) July 12, 2019


For most fans, this kind of foul doesn't come as a surprise. Allen, who's entering his second season in the NBA, entered the pros with a reputation for drawing dirty plays in college. Williams laughed off Allen's ejection when it was brought up by reporters after the game.


"He's a competitor," Williams said. "(I) don't take anything personal, I've always thought about of it as you wind up in the game things like that happen. So you respect him, he's a talented player. He's a guy who did really great things at Duke, he's good friends with a couple of my friends so I don't take it personally. It was just a matter of competing on the court."

Williams and Allen will square off again Saturday at 4:30 as Memphis will look to upset the top-seeded Celtics in tournament play. ESPN will be airing the game.