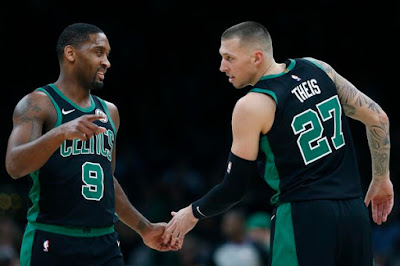 With a thin frontcourt full of young prospects and unproven NBA talent, Stevens will lean on guys like newly acquired center Enes Kanter and Theis -- two big men expected to earn loads of minutes while Stevens continues to develop second-year center Robert Williams alongside rookies like Grant Williams and french import Vincent Poirier. Theis has been a healthy source of offense off the bench for Stevens in the frontcourt but left much to be desired on the defensive end of the floor, especially last season.

He averaged 5.5 points, 4 rebounds in 14.3 minutes throughout his two years in Boston. Meanwhile, Wanamaker will look to make a leap in Stevens' depth chart from a third-string point guard to Kemba Walker's backup.

Wanamaker has proven himself as a solid facilitator and defender but will have to battle out rookies Romeo Langford and Summer League standout Carsen Edwards. He averaged 4 points and 1.6 assists last season.

Theis' deal is reportedly worth $10 million for the next two seasons, Wanamaker will be back on a one-year deal, worth the league minimum $1.4 million.