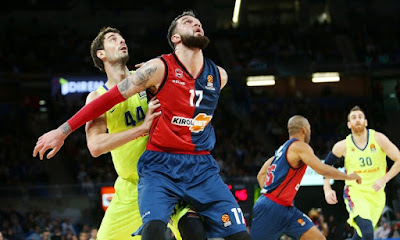 The Celtics have officially announced the signing of French center Vincent Poirier to a contract.

According to NBA insider and ESPN writer Tim Bontemps, the Celtics and Poirier have agreed to a two-year, $5.1 million deal.


The two-year deal the Celtics agreed to today with big man Vincent Poirier was for a total of $5.1 million, league sources told ESPN. Poirier averaged 10.5 points and 7.3 rebounds last season for Baskonia in 59 games between the Spanish and Euroleagues.
— Tim Bontemps (@TimBontemps) July 15, 2019


Poirier, who's 25 years-old, will join the NBA after playing six years professionally overseas. His most recent team Kirolbet Baskonia Vitoria-Gasteiz, he averaged 10.5 points (61.6 percent from the field), 7.3 rebounds and 1.0 blocks in 73 games, including 59 starts during the 2018-19 season (splitting between the Euroleague and Spanish ACB).

During Euroleague competition (34 games), Poirier averaged 11.9 points and 8.3 boards (3.4 offensive), as he was ranked first in rebounding. He was the only player in the Euroleague to average at least 10 points and 8 rebounds.