Brad Wanamaker returns to Celtics on a 1-year deal 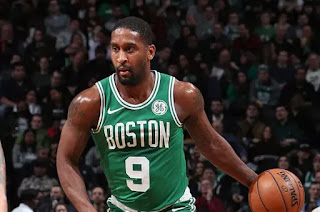 After agreeing to terms with one Celtics player in Daniel Theis, the Celtics are bringing back another to add to their backcourt.

Brad Wanamaker will return to Boston on a one-year deal, according to ESPN's Adrian Wojnarowski. Last summer, the 29-year-old rookie chose an opportunity to play for the Celtics over much more lucrative offers from overseas clubs before Boston inked him to a one-year deal, worth $852,116.

Behind Kyrie Irving, Marcus Smart and Terry Rozier in the depth chart, Wanamaker didn't see a whole lot of playing time last season when he averaged 3.9 points in 9.5 minutes per game. However, this season, Wanamaker should be part of Brad Stevens' rotation barring any other acquisitions to the Celtics' backcourt.

Rookies Romeo Langford and Carsen Edwards will compete for playing time off the bench for Stevens. However, Wanamaker should find himself ahead of Boston's draftees before opening night.

He's proven himself as a facilitator with a burst of speed to get to the rim and as a solid 1-on-1 defender against opposing guards. Slotted behind Kemba Walker, Wanamaker should flourish in his newfound role and would serve as the team's elderly statesman -- he turns 30 at the end of the month.

Wanamaker posted the following on Twitter moments after the news broke.