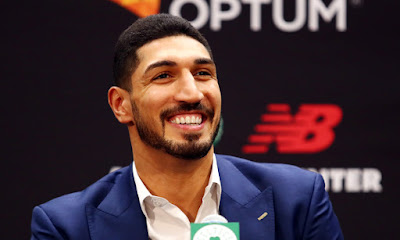 Enes Kanter couldn't wait to say why he chose to don No. 11 for the Celtics.

It was a question he knew was coming and Kanter had an answer loaded and ready to fire at his introductory press conference alongside his new point guard, Kemba Walker and the Celtics brass.


"I want to be the reason no one else will wear it," Kanter said as he leaned into his microphone and smiled. "Sorry, I had to."

The dig at former Celtics point guard Kyrie Irving is a reference to Irving's Nike commercial that aired early in the 2018-19 regular season where Irving is playing basketball with his father at TD Garden and said the exact same words while narrating about having his No. 11 retired in Boston. It feels like the ad was made years ago, considering how last year played itself out between Irving and Celtics.

However, Celtics president of basketball operations Danny Ainge rebounded nicely in the wake of losing Irving and Al Horford in free agency. Swapping the two for Walker and Kanter isn't an easy feat in today's NBA climate, where talented guys aren't always within reach under such short notice.

Kanter, who agreed to a two-year deal worth just under $10 million, is already adored by Celtics fans and he hasn't played a single game yet. Instead, he trolled NBA analyst Nick Wright for criticizing Boston's off-season of acquisitions and then poked fun at Irving.


The only disaster is that hairpiece 😂@getnickwright https://t.co/kp72NZkcu8
— Enes Kanter (@EnesKanter) July 4, 2019

Seems like Kanter is going to fit in just fine around these parts.