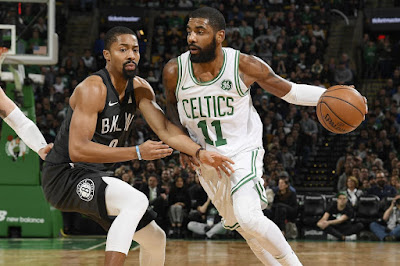 Kyrie Irving may have had his eyes set on joining the Nets sooner than most people thought.

After Celtics president of basketball operations Danny Ainge revealed Wednesday at Kemba Walker and Enes Kanter's introductory press conference that he got the sense during the latter weeks of the regular season that Irving wasn't going to stay in Boston, Nets guard Spencer Dinwiddie said he got the feeling that the 'Uncle Drew' star was contemplating his exit towards the end of 2018. Dinwiddie, who joined Shams Charania's Podcast this week, opened up about his relationship with Irving; how the two became friends and the conversations they had during the 2018-19 campaign.

My debut on The Athletic Podcasts, with Nets guard Spencer Dinwiddie. Inside his relationship with Kyrie Irving, when their initial dialogue began, how Brooklyn appealed to free agents, 'silver lining' of 2019-20 without Kevin Durant, more. https://t.co/xCvi9uh55z pic.twitter.com/piVeTI8qbd
— Shams Charania (@ShamsCharania) July 17, 2019


The two guards connected in Boston last summer when they attended a Harvard Business School course together before Irving eventually reached out in the winter.


"You could just tell from the conversation that it was a little bit different," Dinwiddie said. "Actually, it definitely was December because he made a comment to me, he was like, 'New York might be real fun next year,' because I hadn't signed yet. That's when I was first tipped off to the whole thing."

Ainge, on the other hand, didn't see it coming until weeks before the playoffs. The Celtics president of basketball operations referred to Walker and Kanter as his Plan A Wednesday and added when he specifically started to think Irving was most likely going to be out of the picture come summertime.


"I think I had a pretty good idea in March or April," Ainge said. "Not for sure though, not certain. But I was obviously thinking a move in a different direction at that point, thinking of the different options."

The Celtics did reach out to Al Horford, Ainge added, but according to Ainge it was clear which direction both sides were heading towards.


"Once we felt we had Kemba and we talked to Al's agent, and talked with him about the circumstance, it was made clear where we were," Ainge said. "But I think a decision had already been made.

"When we got done with the draft and we started our preparation for free agency, as we started planning for Plan A, our Plan A was Kemba Walker and Enes Kanter. We were very fortunate that they chose the Boston Celtics."