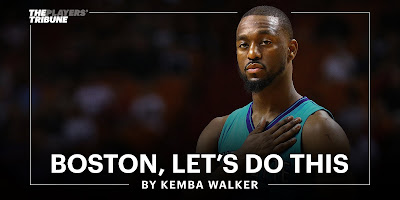 All-Star point guard Kemba Walker is wasting no time getting acclimated to his new city.

After 24 hours of the news of Walker officially agreeing to sign with Boston Sunday evening, the newly acquired Celtics point guard headed to the Auerbach Center -- the Celtics' practice facility on Monday.

Video of Celtics president of basketball operations Danny Ainge talking to Walker outside of the Auerbach Center was captured Monday afternoon.


Walker was also spotted in Boston, where he was signing autographs for kids.

Kemba Walker signed some autographs for fans on Newbury St. this afternoon in Boston.


This happened hours after Walker posted a heartfelt letter for The Players Tribune, where he thanked the Hornets organization, players and fans while also addressing Celtics fans. He talked about what kind of leader he is, how much he's looking forward to playing for Boston and may have even taken a shot or two at his predecessor, former Celtics point guard Kyrie Irving.


"I'm never going to shout out anyone off the court, or get overly negative," Walker wrote. "It's not my style. But what I do is I take pride in making my teammates better."

In a game against the Magic during the regular season, Irving yelled at Gordon Hayward at the end of a 105-103 loss when Hayward elected to give Jayson Tatum the ball on the last play of the game instead of Irving. The former Celtics point guard also questioned his teammates numerous times throughout the season, something that was often publicized and documented by writers and reporters.

With one day, essentially, under his belt since his agreement, Walker is already making fans happy between his letter and his unexpected appearance. It should make for an exciting season for Boston.