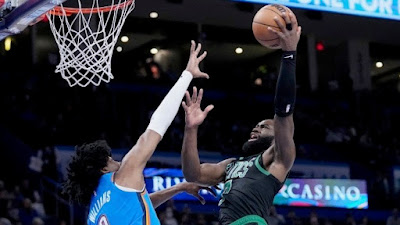 The Celtics were embarrassed by the Oklahoma City Thunder, losing in a 150-117 blowout Tuesday night.
Jaylen Brown, who had a game-high 29 points, was asked to explain what happened at Paycom Center following the historic defeat.

"We got our asses kicked. That's what happened," Brown said in his postgame presser. "You come out, you take it for granted, that's what happens. We probably had it coming to us."

Boston currently owns the NBA's best record at 26-12, despite dropping two in a row, as they're currently on a four-game western swing. After losing five of six during a rough stretch last month, the C's responded with four consecutive wins -- including huge victories over the Milwaukee Bucks and Los Angeles Clippers -- to wrap up December.
Still, Brown, who has scored at least 29 points or more in each of the past six games, said he was "preparing myself physically and mentally for a rough first game (of the road trip), knowing that the altitude, long flight and New Year's celebration and all of that can be in account," following Sunday's 123-111 loss to the Denver Nuggets.
According to Malcolm Brogdon, prior to the Celtics' lack of effort against the Thunder, once the team learned that OKC's All-Star Shai Gilgeous-Alexander was a late scratch from the lineup -- "We took a deep breath and relaxed. Honestly we should know better than to come out and not play with aggression, not play with energy and urgency," -- per The Boston Globe.

"We came out the last couple games, we pick and choose when we play," Brown said Tuesday. "We weren't concerned, didn't have each other's back out there, no help side defense, we didn't guard our yard. Those young boys over there came out and they made us look bad.

"It just seemed that, for whatever reason, we let go of the rope completely, which we haven't seen from our team in a long time."

While there is still over a half season left to play, the Celtics understand that there will be adversity to overcome in order to reach the ultimate goal of winning a championship this season.

"It may not be the most popular thing to say but you gotta go through some shit if you wanna get to where you wanna get to," said interim coach Joe Mazzulla during his postgame comments.

The Celtics aren't necessarily overreacting to one game, but they understand that how they respond to a loss of this magnitude is what's going to make the difference going forward.

"We have to get this shit back right," Brown said. "And we will. It's part of the journey, but I think we had that one coming to us, if you ask me.

"We casually stroll into games sometimes thinking we're just going to figure it out as we get to the middle of the game. No, you have to come out ready from the jump. I guess humility is attached to that, that we expect ourselves to win. That's not bad, but you have to play like that expectation, and tonight we just weren't connected, we didn't communicate, we didn't have each other's back out there. I think getting your ass kicked is a way to wake up, for sure."

Brown and his teammates will have the opportunity to respond to some adversity when they face Luka Doncic and the Dallas Mavericks tonight, as TNT has the tip-off at 7:30 ET.
Joel Pavón
Follow @Joe1_CSP