Marcus Smart (knee) listed as out tonight vs. Bulls 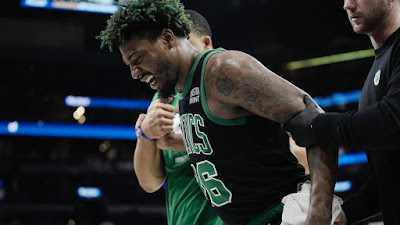 The Celtics will be without Marcus Smart tonight when they host the Chicago Bulls at TD Garden, according to the team.
The veteran guard suffered a left knee contusion in the C's 121-116 win over the San Antonio Spurs Saturday night. Smart sustained the injury with 7:57 left in the third quarter when Zach Collins was called for an offensive foul while setting a moving screen.
Smart fell to the court once he absorbed the hard collision with the Spurs big man and immediately hobbled off the floor with the aid of two Celtics medical staffers straight into the locker room -- but did not return.
While x-rays were negative, per Gary Washburn of The Boston Globe, Smart was seen limping following the victory at AT&T Center and an MRI was scheduled for Sunday once the team returned to Boston.
Smart says leg felt numb once Collins' knee hit him right below his left knee, stating "Yeah I'm walking, but it's a slow walk."
Celtics interim head coach Joe Mazzulla says Smart woke up Monday morning with his knee still feeling sore, but going forward he'll be considered as "day-to-day."
Meanwhile, Smart's teammates will look to make it three wins in a row when they face-off against the Bulls, in a 7:30 ET tip-off.
Joel Pavón
Follow @Joe1_CSP