Marcus Smart's return 'doubtful' vs. Spurs due to knee contusion 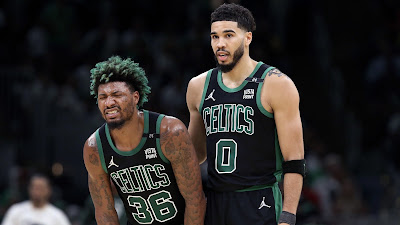 The Celtics could be without Marcus Smart for the rest of their matchup against the San Antonio Spurs due to a left knee contusion, according to the team.
The veteran guard's injury occurred with 7:57 left in the third quarter, when Zach Collins was called for an offensive foul while setting a moving screen on Smart, who fell to the court once he absorbed the hard collision with the Spurs big man. Smart immediately hobbled off the floor with the aid of two Celtics medical staffers and into the locker room.


If Smart does not return, he'll finish his night with five points, four assists and two rebounds against San Antonio in 22 minutes of action.
The Celtics look to make it two wins in a row, as they beat the Dallas Mavericks Thursday night in a 124-95 blowout at American Airlines Center.
Joel Pavón
Follow @Joe1_CSP