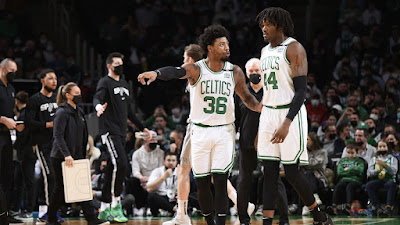 The Celtics will look to win their fourth straight tonight when they host the New Orleans Pelicans, but without Marcus Smart or Robert Williams in the lineup.
The team announced via Twitter, that both starters Smart (knee contusion) and Williams (left knee rehab) would sit out Wednesday night.


Smart, who sustained the injury in the Celtics' 121-116 win over the San Antonio Spurs and did not suit up in the team's 107-99 victory over the Chicago Bulls Monday night either, as he was listed as "day-to-day."
Celtics interim head coach Joe Mazzulla told reporters that Smart is still considered day-to-day, adding "he's better today than he was yesterday and the day before," per CLNS Media's Josue Pavón.
Meanwhile, Williams is resting as part of his left knee rehabilitation since surgery on the partially torn meniscus in March and then again in September of 2021.
Despite making his first start in the Celtics' win on Monday, where he finished with six points, seven rebounds and two blocks in 23 minutes of action, Williams continues to work his way back into shape as the team find themselves with the best record in the league at 29-12 after the first 41 games of the season.
Joel Pavón
Follow @Joe1_CSP