Jaylen Brown on the tandem of him, Jayson Tatum: 'I don't think this is the best you will see' 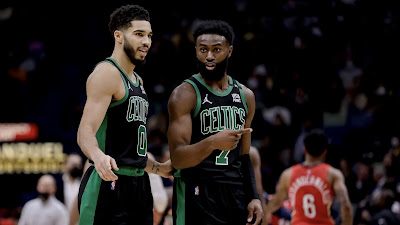 The Celtics are the first team to reach 30 wins this season, while dropping a league best 12 out of the first 42 games played.
Following a 125-114 victory over the New Orleans Pelicans Wednesday night, which was their fourth straight, Boston's All-Star duo of Jayson Tatum and Jaylen Brown combined for 72 points -- the 10th time the two have combined for 70 or more since they've been teammates.
Brown dropped a season-high 41 points (fifth 40-point game of his career) on 15-of-21 shooting from the field, including 3-of-6 from deep to go along with 12 rebounds, while Tatum added 31 points (10-of-22) and 10 rebounds.
According to Brown, there is still another level to be reached in terms of their chemistry, especially after their loss in the NBA Finals just over six months ago.

"I don't think this is the best you will see," Brown said after the win. "But so far I think this is the best in terms of individually that we have come out and played and led our team this season. But, I definitely think we've got other limits to reach in the future and in our career. This is just part of the process, trying to still learn and figure things out.
"I'm interested to see how he continues to grow, how I continue to grow over the years and things like that, but right now we've got to focus on things in front of us, and that's taking care of business and the things in front of us and that's trying to get back to the Finals."

While Tatum is having an MVP type season, Brown is also enjoying his best campaign yet as a pro -- with career highs in points (27.2), rebounds (7.1) shooting percentage (49.8%) and even free throws (79.5%). The 26-year old just became the sixth player in Celtics' history to record multiple 40-point, 10-rebound games.
Boston's interim head coach Joe Mazzulla, who's been around Tatum and Brown the longest out of anyone on the current coaching staff, knows how important it is to use what happened last season as a reminder to trust one another.

Even the elder statesman of this Celtics roster in Al Horford can appreciate how the growth of Tatum and Brown has effected the dynamic of the team in a positive way since the start of the season.

"They continue to grow in front of our eyes," Horford said during his postgame comments. "What we did last year and what they did last year leading us to the Finals, it shows a lot of growth on their end... Now I feel like they're just playing basketball, trying to lead us."

Newcomer and arguably the league's top sixth man in Malcolm Brogdon, also agrees that the C's are being led by superstars Tatum and Brown as they look to return to the Finals and and win it all this year.

"I think that's part of what makes this team great. We got a juggernaut in JT but we got another one in JB," Brogdon said to reporters after scoring 20 points off the bench.

Despite the Celtics having the best record (30-12) at the midway point, Brown knows that they can't get too comfortable because the goal remains the same and that's to win a championship, not to be the best team during the 2022-23 regular season.

"As we progress, I think the message is that comfort will kill you," Brown said Wednesday night. "These other teams are not waiting around for us to let us win the game. You've got to go out and prove it every single night. Success is earned every single night. You've got to show up, play basketball, give your maximum effort and get out of the mindset of being comfortable."

Next up for the Celtics is the red-hot Brooklyn Nets (27-13) tonight at Barclays Center, as TNT has the 7:30 ET tip-off.
Joel Pavón
Follow @Joe1_CSP