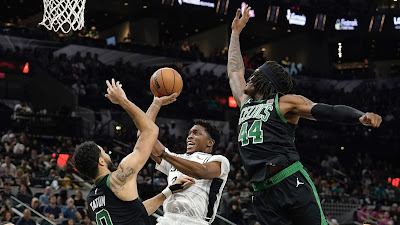 The Celtics made it two wins in a row by beating the San Antonio Spurs 121-116 Saturday night at AT&T Center.
Jayson Tatum hit the go ahead jumper in the final 33 seconds to break a 116-116 tie, as he finished with 34 points on 13-of-26 shooting, including 5-of-10 from deep. Jaylen Brown had 29 points on 12-of-26 from the field.
Malcolm Brogdon added 23 points and 5-of-6 from 3-point territory to go along with seven assists, as he and Derrick White -- who scored eight points, dished out 11 assists and had three blocks -- picked up ball-handling duties after Marcus Smart, suffered a left knee contusion with less than eight minutes left in the third quarter and didn't return.

"I'm actually glad the game went like that for us," Boston interim coach Joe Mazzulla said during his postgame presser. "We needed a game like that, to where it's back and forth. Things aren't going our way; they are going our way. You just don’t get a lot of those. It's easier to say that because we won, but I'm happy the game went the way it did because we got to execute some stuff."

The Celtics have won six of their last eight and currently own the league's best record at 28-12, as they concluded their four-game western swing at 2-2.
San Antonio fell to 13-27 on the season, despite having six players reach double-figure scoring, including Zach Collins (12 rebounds), Tre Jones (five rebounds, five assists) and former Celtic Josh Richardson each netting18 points respectively.
While the Spurs never led once, they did cut into a few of Boston's double-digit leads (were ahead by as many as 15 points).
The Celtics had a 68-57 advantage at the break, before San Antonio opened the second half with a 13-3 run and got within one (71-70). But Tatum and Brown went on a 8-2 spurt by themselves and followed it with another 9-2 run once the home team made it a two-point game with 3:21 remaining in the third period.
Boston was ahead 93-89 heading into the final frame and maintained a single-digit lead the rest of the way. The Spurs made one last rally attempt, outscoring the visitors 13-4, which was capped off with back-to-back shots by former C's wing Romeo Langford (14 points, seven rebounds) to make it a one-point affair (114-113) with 1:12 left to play.
A White alley-oop pass to Robert Williams (10 points, 11 rebounds, four blocks) on the very next possession was matched with a dagger 3-pointer by Richardson to tie it up at 116 apiece -- but Tatum took over and Brogdon secured the victory with a pair of made free throws.

"Obviously they are an extremely well-coached team," Tatum said in his postgame comments. "Teams like that are dangerous. Kind of playing carefree, the pace that they play at. They don't necessarily have an agenda, just pass, cut and try to get the best shot. Constant movement."