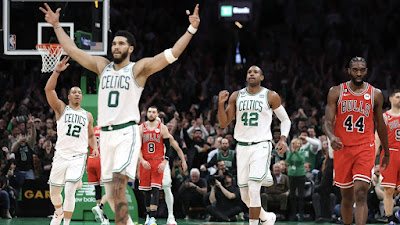 The Celtics have won three straight as they held off the Chicago Bulls 107-99 Monday night in their first game at TD Garden of the 2023 calendar year.
Jayson Tatum continued his MVP play by recording 32 points on 10-of-21 from the field and 4-of-11 from deep, to go along with eight rebounds and seven assists to lead the C's to the NBA's best record of 29-12 at the midpoint of the season.

"That was big. Regardless of their record, it's a really talented team. Any given night, they can beat anybody," Tatum said in his postgame comments, as the Celtics split their four-game season series with Chicago.

"They're always going to play you tough," said Tatum, who becomes the first player in franchise history to reach 1,200 points during the first half of a season.

DeMar DeRozan left the game in the middle of the third quarter with a right quad injury after scoring 13 points on 6-of-9 from the floor in 22 minutes of action for the Bulls.
Zach LaVine led Chicago (19-22) with 27 points, while Nikola Vucevic recorded a double-double of 21 points, 13 rebounds in the loss.
The Celtics led 59-50 at the break, before outscoring the Bulls 20-13 to start the second half and take a 79-63 advantage -- the largest of the night -- with 4:57 left in the third quarter. Chicago finished the period on a 11-5 run to trail 84-73 heading into the final frame.
A LaVine layup, as part of a 15-point fourth quarter, got the Bulls within five (89-84) with 7:37 left to play. Another LaVine 3-pointer with 2:17 remaining made it a two-point game (the closest they'd get the rest of the way). The C's were ahead 101-99, as Tatum found Al Horford (eight points, seven rebounds and five assists) in the right-hand corner to hit a 26-footer to put Chicago away for good (104-99) with 25.1 seconds left on the game clock.

"Credit to Al. That was a big-time shot," Tatum said about the veteran's dagger 3-pointer.

The Celtics will host the New Orleans Pelicans (25-16) Wednesday at the Garden before heading to the Barclays Center on a second night of a back-to-back Thursday to face the Nets (27-13).