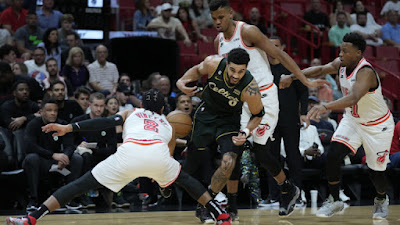 The Celtics fell to the Miami Heat 98-95 Tuesday night on the road, dropping their second straight.
Jayson Tatum led all scorers with 31 points on 9-of-18 shooting, to go along with 14 rebounds and seven assists, while Derrick White had 23 points, six assists for the C's, who are now 35-14 on the season.
Playing without Jaylen Brown (right adductor), Marcus Smart (ankle), Al Horford (back) and Malcolm Brogdon (personal reasons) on a second night of a back-to-back, Robert Williams returned to the lineup to add 11 points, eight rebounds and Payton Pritchard chipped in 10 points, seven rebounds in a starting role.
Bam Adebayo finished with 30 points, 15 rebounds, and Haywood Highsmith recorded 15 points, 10 rebounds off the bench for Miami, who improved to 27-22 and were also without Jimmy Butler (back).
Boston was ahead 58-50 at the break and took a 14-point lead (66-52) with 9:12 remaining in the third quarter -- the largest of the night -- before the Heat cut the deficit in half (82-75) heading into the final frame.
The Celtics pushed it back up to a double-digits following a lob to Williams (87-77) with 8:47 left to play, but Miami responded with a 15-0 run to take their first lead of the second half. Trailing 92-87, Tatum was fouled hitting a floater in the lane and sank the free throw to get within two (92-90).
A Grant Williams (10 points) 3-pointer -- his third of the night -- knotted up 95-95 with 42.1 seconds on the clock and a mid-range go-ahead jumper by Adebayo proved to be the game winner on the very next play, leaving 20.1 left.
Tatum ran the clock and threw the ball away while getting doubled teamed, denying Boston an opportunity to tie or take a lead with less than a second remaining -- giving the Heat the ball back to seal the victory -- despite Pritchard having a clear look at a straightway 30-foot 3 as time expired that fell well short.

"Our spacing was a little off," said Celtics interim head coach Joe Mazzulla. "It was just two good teams out there playing. "They made a few more plays at the end than we did."

Boston, who had a 26-3 record when leading at halftime, 30-3 when having a lead after three quarters and 7-0 on the second night of back-to-backs -- was outscored 21-8 in the final eight-plus minutes against the Heat and held to only 13 total points on 5-of-21 from the field, including 10 straight missed shots in the fourth quarter.
The Celtics will head back to TD Garden Thursday night when they host the New York Knicks (26-23) on TNT at 7:30 ET.