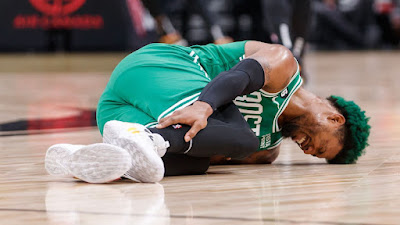 The Celtics will be light when it comes to backcourt depth, as they'll be without Marcus Smart and Malcolm Brogdon when they face the Orlando Magic.
According to the team's Sunday injury report, Smart has a right ankle sprain and Malcolm Brogdon is out for personal reasons ahead of tonight's matchup.


Smart sustained the injury late in the second quarter of the C's 106-104 win over the Toronto Raptors Saturday night. Meanwhile, Robert Williams -- who's also listed as questionable -- collided with his teammate Jaylen Brown and banged the left knee that he's still rehabbing in the same game. Both Williams and Smart did not return following halftime.
Interim head coach Joe Mazzulla provided an update during his postgame presser, assuring that neither injury should be considered as serious.

"Rob hyperextended his knee," said Mazzulla during his postgame comments. "It's nothing serious, just obviously taking precaution. He felt good coming off the court. Smart, obviously you saw, sprained his ankle. X-Rays were negative. It's just a matter of how he's able to cope with it day-to-day,"

The Celtics still have the services of Derrick White and Payton Pritchard to rely on for heavy minutes at the point guard position, as they look to extend their win streak to 10 and avenge two prior losses to the Magic from last month -- tip-off is at 7:00 ET from the Amway Center.
Joel Pavón
Follow @Joe1_CSP