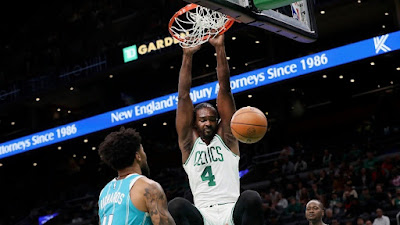 The Celtics are reportedly sending Noah Vonleh and cash considerations to the San Antonio Spurs, according to Shams Charania of The Athletic.
Boston will also receive a future top-55 second-round pick as part of the swap, per Brian Robb of MassLive. This comes just two days prior to Vonleh's one-year, $1.8 million deal becoming fully guaranteed (Jan. 7). The move not only opens up a roster spot for the C's, it also lowers the team's luxury tax bill from $65 million down to $58 million -- saving roughly $7 million in penalties.


With today marking the first day that NBA teams can sign players to 10-Day contracts and the league's Trade Deadline being just over a month away (Feb. 9), the Celtics have given themselves some flexibility for when it comes to being active on the buyout market and adding a player ahead of a possible deep playoff run.
Meanwhile, the Spurs, who waived veteran forward Gorgui Dieng to make a roster spot, are also reportedly expected to waive Vonleh (per Woj) -- despite the team already being approximately $16 million under the salary cap.
Vonleh, a native of Haverhill, Massachusetts -- played 23 games, while averaging 1.1 points and 2.1 rebounds in 7.4 minutes per-contest for the Celtics this season.
Joel Pavón
Follow @Joe1_CSP