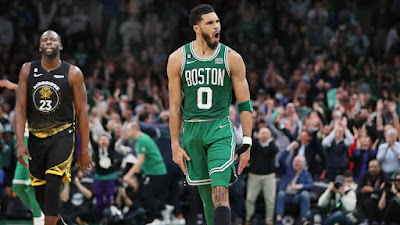 The Celtics topped the Golden State Warriors 121-118 in overtime Thursday night at TD Garden.
Jayson Tatum recorded a double-double of 34 points and a career-high 19 rebounds to go along with six assists, despite shooting 9-of-27 from the field and 4-of-13 from behind the arc to help snap a four-game skid against the NBA champs, including last month's 124-107 loss in San Francisco.

"The fact of the matter is we lost. We lost the championship," Tatum said in his postgame presser. "No one win -- we can't bring that back. We can't go back in time and change that.
"So we didn't look at this as a rematch of the Finals," he added. "It's just one game."

Al Horford (three blocks) also notched a 20-point, 10-rebound double-double of his own, while Jaylen Brown returned from an adductor strain (missed the previous three games) to score 16 points and grab nine rebounds.

"You know, I wanted to come out here, and I wanted to win. I wanted to win really bad," Horford said during his postgame comments. "It's a regular season. It's just one game. It's over. But it's an important game."

Marcus Smart added 18 points, Robert Williams chipped in 14 points, 11 rebounds and Malcolm Brogdon netted 14 off the bench for the Celtics, who have won eight straight and have the league's best record at 34-12.
Stephen Curry led Golden State with 29 points, but on 9-of-25 from the field and 6-of-18 from 3-point territory, plus seven assists. Jordan Poole and Klay Thompson each had 24 points respectively and Andrew Wiggins scored 20 points. Draymond Green nearly had a triple-double with 11 points, 13 rebounds and nine assists for the Warriors, who fell to 22-23 on the season and 5-18 on the road.
Boston was up by as many as 10 in the first half, before Curry hit a go-ahead half court buzzer beating 50-foot 3-pointer to put the Warriors ahead 55-54 at the break.
The Celtics were behind 85-74 (the largest deficit of the night) with 2:12 left in the third quarter -- trailing the entire second half, despite getting within two on several occasions.
Brown, who struggled from the floor (6-of-18), hit his only 3-pointer of the night (1-of-4) to tie the game with 18.1 seconds in regulation -- capping off a 17-9 run and sending the game into overtime.
In OT, back-to-back field goals by Smart and Brown gave Boston a 110-106 advantage -- their first since late in the second period -- but a pair of made free throws by Green and Curry's sixth 3 put the Warriors up 111-110 with 2:42 remaining.
The C's used an 8-0 spurt to take the lead for good and were up 121-113 with 38.0 ticks left to play. Golden State nearly tied the game again when they responded by scoring five unanswered points, before Poole missed a 43-footer in the final seconds.
While both teams didn't shoot particularly well and each committed at least 16 turnovers (Boston had 17), interim coach Joe Mazzulla was pleased with the hard fought victory.

"I think what we've learned is it takes a mindset in order to be successful," said Mazzulla about his roster -- who are now 2-3 in OT this year. "That was a fun game, that was a really, really fun game. I'm really, really happy for our guys."