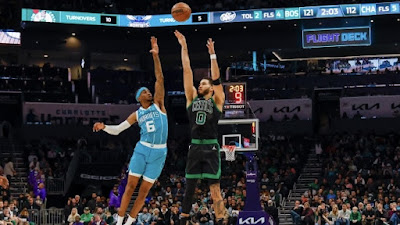 The Celtics completed a three-game road trip with a 130-118 win, their second consecutive victory over the Charlotte Hornets at Spectrum Center Monday afternoon and seventh overall.
Jayson Tatum led the way with a magnificent 51-point, 9-rebound, and 5-assist performance on 15-of-23 shooting, including going 14-of-14 from the free throw line. Tatum also shot 7-of-12 from long-distance, a marked improvement over the last few three point displays for the All-Star forward. Perhaps what was even more impressive was Tatum's efficiency, scoring 51 points on only 23 shots -- connecting on 65% from the field, 58% from three, and 100% from the free throw stripe.

"I thought he did a good job just taking what defense gave him," Boston interim head coach Joe Mazzulla said postgame about Tatum's performance. "Credit to him, and credit to our guys for having the humility to work to help him achieve what he achieved tonight, and I think that's what makes us a great team… He's thinking a play ahead and so is our team."

Despite not having star wing Jaylen Brown (right adductor strain) for the third straight time, the Celtics controlled this game the whole way, leading by as much as 17 at one point. Malcolm Brogdon chipped in 16 points in the first half off the bench, while Derrick White came through for 19 points, eight assists as well after returning from a neck sprain in the team's 122-106 win on Saturday.
The Hornets hung around this game throughout, due in large part to their three-point shooting, hitting 13-of-31 from long range and 10 of Charlotte's made 13 threes came from their top two scorers, Jalen McDaniels and LaMelo Ball. McDaniels ended the afternoon as the leading scorer for the Hornets, scoring 26 points while going 5-of-7 from three, with Ball not far behind him at 25 points on 5-of-12 from deep. The Hornets also got some contribution from Mason Plumlee with 19 points, 12 rebounds and P.J. Washington, who added 17 points.
Another contributing factor to the Hornets hanging around was the lackluster defense from the Celtics after the first quarter. Charlotte shot 28.6% from the field in the first 12 minutes, but finished the game making 45.6% of their overall attempts. The Hornets went on a 10-0 run to close the third period, cutting their deficit to six (92-86), giving them some life heading into the final frame. Charlotte went on to cut the lead down to as little as two (100-98) with 8:59 left to play, before Tatum subbed back in to put the game away, leading the Celtics on a 14-4 run.
Tatum's 51 point showcase aside, the ball movement of the Celtics was key to keeping the Hornets at bay in Monday's contest. Boston ended the game with a whopping 34 assists on 43 made baskets, including 21 of their first 23 shots coming on an assist. Marcus Smart (10 points) had six dimes and Grant Williams (nine points, nine rebounds) also recorded a career high six assists in the win. Despite numerous runs by the Hornets to stay within striking distance, Boston never strayed from their ball movement as a collective.
The Celtics (33-12) head back to TD Garden where they'll host the defending champion Golden State Warriors (22-22) on Thursday night, as TNT has the tip-off at 7:30 ET.