Celtics 124, Mavericks 95: Jayson Tatum notches triple-double to get past Dallas 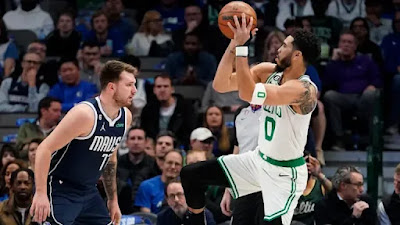 The Celtics have finally won a game in 2023 after beating the Dallas Mavericks 124-95 Thursday night at American Airlines Center.
Jayson Tatum recorded his second career triple-double of 29 points, 14 rebounds and 10 assists, while Jaylen Brown had 19 points, seven rebounds to lead Boston and bounce back from an embarrassing 150-117 loss to the Oklahoma City Thunder.
Marcus Smart, fresh off a $35,000 fine from the NBA, finished with 15 points and Malcolm Brogdon also netted 15 points off the bench, as both guards hit a combined 7-of-14 from deep to help the C's snap a two-game skid to start the new year and improve to 27-12.

"When we're at our best, we play really good basketball on both ends of the floor with high effort for a long period of time," Celtics interim coach Joe Mazzulla said in his postgame presser. "And then we go through a couple of games where we lose that. What I love about tonight was we did bounce back."

The Celtics limited MVP candidate Luka Doncic to 7-of-23 shooting, including going 0-of-6 from behind the 3-point arc, as he scored 23 points (nine rebounds) -- after coming in averaging 44.5 points over the previous five starts.
Spencer Dinwiddie added 18 points, five assists, while rookie Jaden Hardy chipped in 15 points off the bench for the Mavericks, who were winners of seven straight but are now 22-17.
Boston never trailed again after Grant Williams (12 points) drained a go-ahead 3-pointer with 6:06 remaining in the first quarter that eventually turned into a 64-46 advantage at the break.
The closest the Mavericks would get in the second half was 13 and the largest lead for the C's was 30, before Doncic sat out the fourth period.
After allowing the Thunder to shoot nearly 60% from the field two days prior, Boston held the Mavs to just 37.8% from the field, including 7-of-32 from long distance.

"They showed me they can do it one time," Mazzulla said. "They have to do it over and over again."

The Celtics head to San Antonio Saturday to take on the Spurs (12-26) Saturday night to wrap-up their four-game western road trip.