Marcus Smart fined $35K after his ejection vs. Thunder 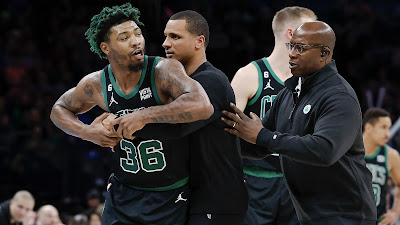 The NBA announced Thursday afternoon that Marcus Smart has been fined $35,000 for "directing inappropriate language toward a game official."
The Celtics guard was assessed his second technical foul with 2:46 left in the third quarter of the team's 150-117 blowout loss to the Oklahoma City Thunder.

The following was released by the NBA. pic.twitter.com/l0c06fCZWm


Smart finished with seven points (3-of-6), four rebounds and eight assists, before reportedly yelling "you're fucking horrible" to an official -- while being held back by C's interim head coach Joe Mazzulla -- which led to his night ending early.

Marcus Smart ejected vs. OKC: Here's a look at what happened #BOSvsOKC pic.twitter.com/ZcTaC71bde

The Celtics look to bounce back when they face the Dallas Mavericks at American Airlines Arena tonight, as tip-off is at 7:30 ET on TNT.
Joel Pavón
Follow @Joe1_CSP