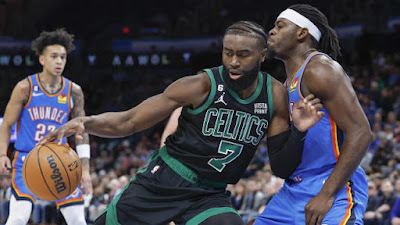 The Celtics continue their bad start to the 2023 calendar year, as they fell to the Oklahoma City Thunder in a historic 150-117 blowout loss at Paycom Center Tuesday night.
Despite Jaylen Brown leading all scorers with 29 points on a efficient 11-of-18 and Jayson Tatum adding 27 points (9-of-17), the rest of those who played for Boston shot a combined 20-of-53 (37.7%) from the field, including going 8-of-26 (30.7%) from behind the arc.
Playing without Robert Williams (knee injury management), Malcolm Brogdon (nine rebounds) and Payton Pritchard each added 17 points off the bench respectively for the Celtics -- who have dropped two straight after winning four in a row and are now 26-12 on the season.

"You have to play with a sense of humility every night knowing your opponent wants to beat you," Celtics interim head coach Joe Mazzulla said in his postgame comments. "We have to match that, and we didn't. We got outplayed in every aspect of the game."

Thunder's All-Star Shai Gilgeous-Alexander (30.8 points per-game average this season) was a late scratch, but it didn't matter as his teammates set a franchise record for the most points scored since moving to Oklahoma City from Seattle prior to the 2008-09 campaign -- after the pervious mark was 149 back in 2013.
Josh Giddey had a team-high 25 points and Lu Dort scored 23 points, as both combined for 6-of-11 from 3-point territory. Jalen Williams (six assists), Tre Mann (six rebounds) and Isaiah Joe each netted 21 points apiece -- making it only the second time the Celtics allowed five players to record 20-plus points in over the past 50 years.
Boston's largest lead in the first quarter was three, as they trailed 34-33 heading into the second, as the Thunder dropped 40 to finish the half to take a 74-54 advantage into the break -- while hitting nearly 60% of their shot attempts.
Oklahoma City used another 10-0 to within the first three minutes of the second half to go up 90-63 and never looked back on their way to a 48-point third period. The Thunder were up 122-91 heading into the final frame -- making it the most points scored by an opponent through three quarters in Celtics history.
Marcus Smart picked up his second technical foul (first was issued in the second quarter) and was ejected with 2:46 left in the third after arguing with an official.
The Thunder took full advantage of Williams not being in the lineup for Boston, as they outscored the visitors 70-46 in the paint and out-rebounded them 44-38.
The Celtics head to Dallas Thursday night to face the Mavericks (22-16) in a 7:30 ET tip-off on TNT, before they wrap-up their four-game road trip Saturday in San Antonio.
Game Notes:
Boston was 45.5% from the field, including 12-of-40 from deep, while the Thunder hit 59.2% of their attempts and 20-of-40 from long distance. The Celtics dished out 31 assists on 40 baskets and Oklahoma City had 29 dimes on 58 made shots. The C's also committed 17 turnovers that were converted into 21 fast break points and OKC turned the ball over 13 times.
Joel Pavón
Follow @Joe1_CSP