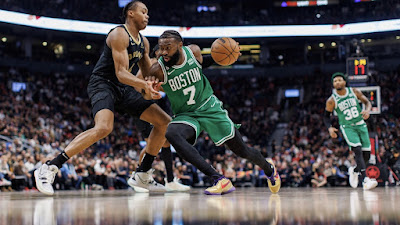 The Celtics rallied once again from a double-digit deficit to beat the Toronto Raptors 106-104 Saturday night at Scotiabank Arena and win their ninth straight.
Jaylen Brown finished with a team-high 27 points on 10-of-23 from the floor, including 4-of-8 from deep, to go along with eight rebounds, five assists and three steals. Grant Williams recorded a career-high 25 points on 7-of-13 from the field and 4-of-6 from 3-point territory.
Boston was already playing without Jayson Tatum (sore left wrist) in the lineup following the team's 121-118 overtime victory over the Golden State Warriors, but Marcus Smart did not return after halftime when he sustained an ankle injury in the final minute of the second quarter -- as he needed to be helped off the court and into the locker room.
Robert Williams remained in the game following Brown colliding into his left knee in the first period, before being ruled out at the break due to an hyperextended knee -- the same one he got surgically repaired back in March and then again in September of last year.

"It says a lot about our team," Boston interim coach Joe Mazzulla said during his postgame comments. "In the beginning of the game, you could obviously feel that we just didn't have the juice. We just kept playing. We never wavered, we made great plays. Guys did a great job managing the game."

Malcolm Brogdon added 23 points, seven rebounds and Payton Pritchard chipped in 12 points off the bench all in the final frame for the C's, who improved to 35-12 on the season and have been unbeaten since their embarrassing 150-117 loss to the Oklahoma City Thunder nearly three weeks ago.

"To win in the NBA is hard enough, to win on the road down a bunch of guys is hard to do," Brown said in his postgame presser. "You don't want to take it for granted, but we definitely have enough on this team, enough in this locker room, to win games whoever is on the floor."

Pascal Siakam notched a near triple-double of 29 points, nine rebounds and 10 assists to lead Toronto, who was also without Fred VanVleet (rib soreness). Gary Trent Jr. had 22 points and Precious Achiuwa added 17 points, 11 rebounds for the Raptors -- that have fallen to 20-27 and are on a three-game skid.
Boston trailed 57-50 at intermission, before getting within three (68-65) halfway through the third and cutting it once more to one (78-77) with 1:57 remaining in the quarter.
The Celtics were down 85-81 to start the fourth and used a 20-8 run to take a lead (101-93) for good with 5:53 left to play. Toronto responded by going on a 9-5 spurt, but Trent Jr blew a layup that would have tied the game at 106 apiece with 21.1 ticks on the clock.
After an offensive foul call on Grant Williams, the Raptors had on more opportunity, but threw the ball away on a Al Horford steal. Despite the veteran forward recording only five points, seven boards -- Horford pulled down a rebound, blocked a shot and stole the ball at midcourt to secure the win in the final 20 seconds.

"The box score doesn't tell the story about what he does for us," Mazzulla said. "When he takes it to another level defensively, we're a different team."