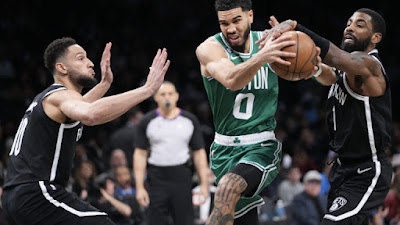 The Celtics held off the Kevin Durant-less Brooklyn Nets 109-98 Thursday night at Barclays Center.
Playing without Jaylen Brown (right adductor tightness) and Al Horford (lower back stiffness) on a second night of a back-to-back, Boston had six players score in double-figures to win their fifth straight and maintain the league's best record at 31-12.
Jayson Tatum, who didn't shoot particularly well, finished with 20 points on 7-of-22 from the field and 2-of-10 from 3-point territory to go along with 11 rebounds and five assists.
Marcus Smart returned from a two-game absence with a left knee contusion to notch 16 points, 10 assists, while Malcolm Brogdon also added 16 points off the bench -- as he and Payton Pritchard (nine points) led the charge to start the fourth quarter during which Smart and Tatum were resting.

"They got us on a rhythm, they got our momentum back for us," Smart said during his postgame presser about the two reserve guards putting the C's in position to grab the win.

Derrick White started in place of Brown to score 15 points on 4-of-7 from behind the arc and Grant Williams replaced Horford with 12 points, five rebounds as a starter.

"So it makes us really dangerous and fast" Pritchard said in his postgame comments of the depth and quickness of the team's backcourt. "I think that's kind of what changed the game, is that speed."

Meanwhile, the Nets were without Kevin Durant for the first time since he sprained his right MCL just a couple of days prior and he'll be sidelined at least two weeks before the right knee gets re-evaluated.
Kyrie Irving went 3-of-10 in the final frame and 9-of-24 overall from the floor, including 3-of-11 from deep to register 24 points and six assists to lead Brooklyn, who fell to 27-14 and are now three games behind the Celtics for the best record in the East -- losing for only the second time in the last 10 tries.
T.J. Warren had 20 points on 9-of-18 off the bench, Joe Harris -- who started for Durant -- netted 18 points and Ben Simmons went scoreless on three shot attempts, but dished out a season-high 13 assists and grabbed nine rebounds for the Nets.
The Celtics led 60-57 at the break following Tatum sinking all three free throws with 9.8 seconds left to finish the first half. In a back and forth third quarter, Boston took a 84-82 advantage into the final period, before using a 12-2 run to start the fourth, which was capped off by a Luke Kornet (11 points, five rebounds) reverse alley-oop on a lob from Smart.
The Nets missed six of their first seven field goal attempts to open up the fourth and trailed 96-84 with 7:34 left to play, as they only managed to score a total of 14 points the rest of the way and 16 overall -- failing to reach 100 against Boston for the second time this season.
It was the ninth straight loss for the Nets against the Celtics, including being swept out of the first-round of the playoffs and dropping the final three regular season bouts between both teams last year.
The Celtics head to Charlotte to take on the Hornets (11-32) Saturday night at 7:00 ET and then again in a 1:00 PM ET Monday afternoon matinee.