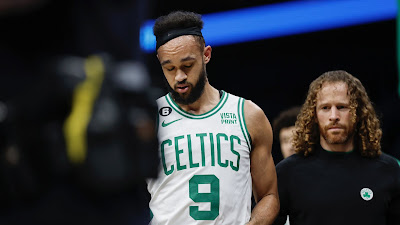 The Celtics have listed Derrick White as probable for Monday's rematch against the Charlotte Hornets with a neck sprain.
The veteran guard sustained the injury less than five minutes into the first quarter of the C's 122-116 win over the Hornets, when he collided with teammate Marcus Smart. White stayed on the floor for a long period of time before getting up to leave the court and he did not return.


Interim head coach Joe Mazzulla told reporters after the game that White was "OK" once he spoke with him in the locker room.

"He's good," Mazzulla said during his postgame comments. "I haven't gotten a report back, but he's OK, I talked to him in the locker room. He's doing better."

After a 15-point performance against the Brooklyn Nets, White was off to another hot start, as he hit 3-of-3 from the field, including knocking down 2-of-2 from deep to finish with eight points in his brief four minutes of action.
In 44 games this season, White is averaging 9.9 points, 3.3 assists, 3.1 rebounds and 1.4 blocks per contest.
Meanwhile, Malcolm Brogdon filled in nicely in White's absence -- scoring a season-high 30 points off the bench -- while playing an increased roll to help Boston win their sixth straight.

"I thought Malcolm was great tonight," Mazzulla said. "He's a guy that is adjusting to playing on our team. And he shows tremendous humility and patience, and tonight was big for him. He really helped our team, he was really selfless, and I'm happy for him."

The Celtics will look to win their seventh straight when they face the Hornets again in a MLK Day matinee (1:00 PM ET), before having three days off. Jaylen Brown, who has missed the last two games, also remains out with right adductor tightness.
Joel Pavón
Follow @Joe1_CSP