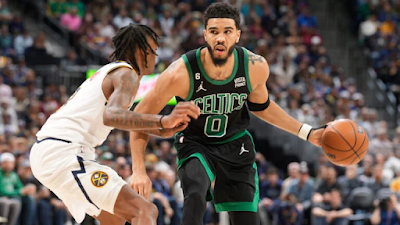 The Celtics started off 2023 with a 123-111 loss to the Denver Nuggets at Ball Arena Sunday night, to snap a four-game win streak.
Jaylen Brown continued his recent offensive tear, scoring 30 points on 12-of-20 from the field, including 4-of-8 from behind the arc to go along with eight rebounds. Jayson Tatum finished with 25 points, seven rebounds and six assists, while Derrick White added 13 points for Boston -- who fell to 26-11 on the season and a 1.5 game lead in the East.
Aside from the Celtics only hitting 9-of-33 from 3-point territory, there was a near 40-minute delay with 6:43 left to play, as a crew had trouble trying to re-level the rim after an alley-oop dunk by Robert Williams III on a lob from Brown.

"I didn't know I did it until my teammates started blaming me," Williams said during his postgame presser after putting up eight points, six rebounds and two blocks off the bench. "I've never done that before."

It took a total of six workers, two ladders, a level and eventually the rim was taken off the backboard and realigned again before it appeared fixed.

"There was no communication. They spent all that time trying to fix it but when we came back it still looked like it wasn't even level, in my opinion. So we just wasted all that time," Jaylen Brown said in his postgame comments.
"That has an effect on the game. That's how injuries and stuff happen. Luckily that didn't (happen), but that wasn't good. That whole process was handled poorly, in my opinion, and that had an effect as well. But luckily nobody got hurt."

Both teams were allowed to warm up and play resumed, as Denver took full advantage of a double-digit lead to put away the C's for good.
Nikola Jokic recorded yet another triple-double of 30 points, 12 rebounds and 12 assists, while Bruce Brown added 21 points on 4-of-8 from deep, starting in place of Jamal Murray (sore knee). Michael Porter Jr. netted 19 points and Aaron Gordon chipped in 18 points, seven assists for the Nuggets -- who improved to 24-12 (first in the West) and have won seven of their last eight.
The Celtics trailed 37-28 after the first quarter and cut the deficit to single-digits (62-54) at the break, before getting as close as five (66-61) within the first three minutes of the second half.
Denver went on a 15-2 run and led 98-85 heading into the final frame, despite Boston outscoring the home team 26-25 in the third period.
Al Horford (eight points, six rebounds) hit a 23-footer from beyond the arc as the last basket for the C's -- and they were down 110-97, with both teams scoring 12 points a piece to start the fourth when the stoppage in play occurred.
The Nuggets had a 120-106 advantage with 2:05 remaining once play resumed and interim coach Joe Mazzulla -- who had missed the previous two games with a corneal abrasion -- pulled his starters.

"I was asking our staff what you do in a situation like that, as far as making sure the guys are still healthy and we still want to go out there and compete," Mazzulla told reporters following the loss when asked about the delay. "I also wanted to make sure to put our guys in the right position."

The Celtics will continue their four-game road trip when they head to Oklahoma City to take on the Thunder (15-21) Tuesday night.
Game Notes:
Boston made 46% of their field goal attempts, including 27.3% from 3-point territory, while the Nuggets were 57% from the floor and 56.7% (17-of-30) from long distance. The Celtics out-rebounded Denver 41-35 and outscored them in the paint 60-46. The C's also dished out 30 assists on 40 baskets and the home team had 31 dimes on 45 made shots.
Joel Pavón
Follow @Joe1_CSP