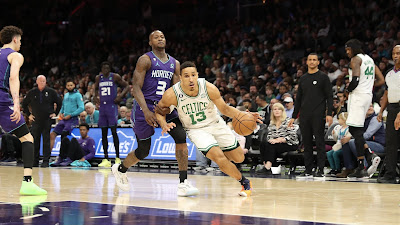 The Celtics pulled-off a 122-106 comeback victory over the Charlotte Hornets at the Spectrum Center Saturday night.
Jayson Tatum scored 17 of his 33 points in the third quarter and finished 12-of-27 overall from the field, to go along with nine rebounds and six assists. Malcolm Brogdon stepped up after Derrick White sustained a neck injury five minutes into the game, recording a season-high 30 points off the bench on 11-of-17 shooting, including 4-of-6 from deep.

"I think it's just this team's depth," Brogdon said in postgame presser. "We have a lot of really good players on this team and it is just a next man up mentality. So I think that's what we've been experiencing when JB has been out, when I've been out, when, you know, whoever's out, someone else steps up."

Despite not having Jaylen Brown (adductor strain) in the lineup for a second game, Al Horford made his return from a lower sore back after missing the team's 109-98 win over the Brooklyn Nets, to notch 16 points (4-of-7 from 3), seven rebounds and six assists, while Marcus Smart added 13 points, 12 assists to help the C's win their sixth straight and improve to a league's best 32-12.
LaMelo Ball led Charlotte with a team-high 31 points, nine assists, while former Celtic guard Terry Rozier finished with 21 points and P.J. Washington chipped in 14 points for the Hornets, who fell to 11-33 on the season.
Boston trailed by 16 (58-42) with 5:20 left in the second quarter before they used a 20-8 run by hitting four 3-pointers during that stretch to only be behind 66-62 at the break.
Tatum went 7-of-12 from the field and hit four 3s in the third period to help the Celtics outscore Charlotte 33-19 and take a 95-85 lead into the final frame.

"He's done a really good of developing an awareness, because it changes night to night and quarter to quarter" Boston interim head coach Joe Mazzulla told reporters of Tatum following the win. "So he's done a nice job of building an awareness to what the coverage is and having a solution for that."

The Hornets never got any closer than nine points the rest of the way, as they have dropped eight of their last 10 games.
Boston scored 15 second chance points on 14 offensive rebounds and were 19-of-53 from behind the 3-point arc, including 12 made triples in the first half alone to cut their double-digit deficit.

"I think we lose that game a month ago," Mazzulla said. "One of these things we talk about is closing out quarters and starting quarters, so the end of the second quarter was huge for us. I thought we did a great job staying the course."

The Celtics will remain in Charlotte to face the Hornets once again at a special 1:00 PM ET matinee MLK Day tip-off on NBA TV.
Game Notes:
Boston was 47.5% from the floor, including 35.8% from the behind the arc, while the Hornets were 46.6% from the field and 29.6% (8-of-27) from 3. The Celtics outscored Charlotte 60-48 in the paint, as both teams grabbed 46 rebounds respectively. The C's dished out 35 assists on 47 baskets and the home team had 21 dimes on 41 made shots.
Joel Pavón
Follow @Joe1_CSP