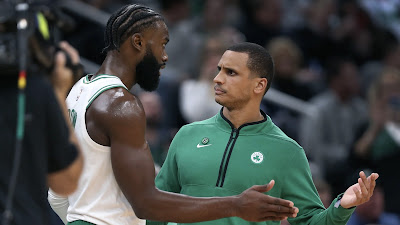 It was less than 24 hours from Jaylen Brown going off with a season-high 41 points, when the Celtics learned the All-Star wing could potentially miss a good stretch of games.
Just shortly before the C's tipped-off against the Brooklyn Nets to win their fifth straight, interim head coach Joe Mazzulla gave an update in his pre-game presser that Brown was ruled out of Thursday's matchup with a right adductor strain, adding that Brown could also be sidelined "a week or two."
While Mazzulla  noted that Brown initially tried to join the team in warmups ahead of the taking on the Nets at the Barclays Center, but was listed as out prior to stepping onto the court.

"I'm not sure what the timeline is," Mazzulla told reporters. "I know he tried to give it a go today and wasn't able to do it. We'll know more the next couple days, see how he responds."

Following the Celtics 125-114 victory over the New Orleans Pelicans Wednesday in the team's first night of a back-to-back, Brown stated during his TV postgame interview that he "tweaked" his groin late in the fourth quarter and was subbed out with less than three minutes left to play.

"I was done," Brown said to NBC Sports Boston's Abby Chin. "I tweaked my groin a little bit, so I was done. I'm going to get it looked at after the game and get ready for the next one. … Going to get my treatment, go through my routine, and see what it looks like for tomorrow."

Brown is averaging a career-high 27.2 points on 49.8% shooting and 7.1 rebounds per contest in 40 games played so far.
The Celtics at 31-12 head to Charlotte to face the Hornets (11-32) on Saturday and again Monday afternoon.
Joel Pavón
Follow @Joe1_CSP