Robert Williams listed as questionable ahead of Tuesday's matchup vs. Thunder 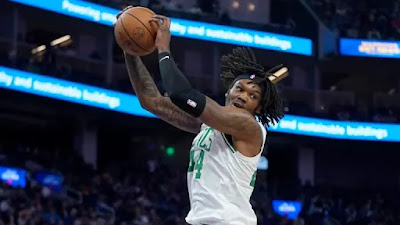 The Celtics may continue to be cautious with big man Robert Williams after playing in his first seven games of the season since returning from knee surgery.
The veteran has been listed as questionable ahead of tonight's matchup against the Oklahoma City Thunder for management on his left knee.
Williams returned to the C's lineup on December 16 against the Orlando Magic after missing the first 30 games of the season. He has slowly worked his way back into game shape, while averaging 8.3 points, 7.3 rebounds and 1.0 blocks per game in 18.9 minutes off the bench so far.
Boston at 26-11, will look to bounce back from their 123-111 loss to the Denver Nuggets on New Year's Day -- which also included a lengthy rim-delay, following an alley-oop dunk by Williams -- as they're currently on a four-game western road trip to start of 2023.
The Celtics and Thunder tip-off at 8:00 ET.
Joel Pavón
Follow @Joe1_CSP