Jayson Tatum to miss matchup against Raptors with sore wrist 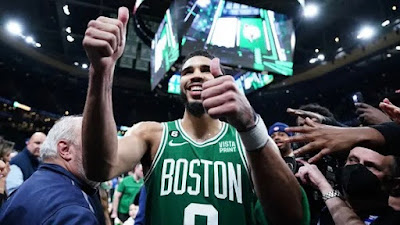 The Celtics will be without Jayson Tatum when the face the Toronto Raptors tonight on at Scotiabank Arena.
According to the team, the three-time All-Star is out with a sore left wrist, following his 34-point, 19-rebound (career-high) performance in the C's 121-118 overtime win over the Golden State Warriors.

#NEBHInjuryReport for tomorrow vs. Toronto:


Despite shooting just 9-of-27 from the field, including 4-of-13 from 3-point territory and committing seven turnovers, Tatum played 48 of the game's 53 total minutes -- while not taking a single breather after the first quarter. The MVP candidate also had six assists and three steals on the night.

"This was a great win in terms of figuring it out," Tatum said in Thursday's postgame presser. "Nobody besides Al [Horford] shot great. Besides that it was just toughness plays, moving on to the next, doing whatever it takes to win and those are the most rewarding wins you can have."

Boston shot 39.8% from the field and 13-of-41 (31.7%) from long-distance in their eighth straight victory. They'll look to extend their streak to nine when they take on the Raptors (20-26) Saturday night.
Joel Pavón
Follow @Joe1_CSP