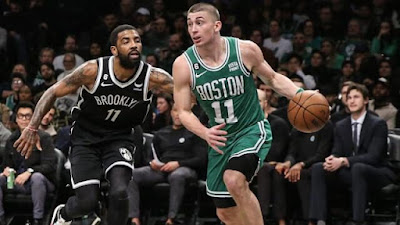 The Celtics continue to roll after beating the Brooklyn Nets 109-98 Thursday night at Barclays Center.
Boston has won five straight, despite playing without starters Marcus Smart (left knee contusion), Jaylen Brown (adductor strain), Robert Williams (left knee management) and Al Horford (lower back stiffness) at one point or another this past week.
Still, for players like Payton Pritchard, who's been waiting for opportunities to open up, he helped get the C's offense going throughout their matchup against the Nets -- scoring nine points and grabbing three rebounds (all offensive) in 15 meaningful minutes.

"That's just my mindset regardless," Pritchard told CLNS Media prior to Thursday's game. "I wouldn't be here if I [didn't] stay ready throughout my whole career. It's about showing up every day and working. If opportunities come, it comes."

Pritchard was indeed ready once he was called upon, as the third year guard finished with a team-high plus-13. The duo of him and Malcolm Brogdon (16 points) off the bench held down the fort to start the fourth quarter while Smart (16 points, 10 assists) and Jayson Tatum (20 points, 11 rebounds) got some quality rest.
The reserve guards put together a 9-2 run on their own to give the Celtics a 92-84 lead to start the final frame, before Tatum and Smart re-entered with 8:31 left to play and put the game away -- scoring a combined eight or assisting on the next 15 points to seal the win.

"They got us on a rhythm, they got our momentum back for us," Smart said during his postgame presser about Brogdon and Pritchard putting the C's in position to grab the victory.

Celtics interim coach Joe Mazzulla not only praised the second unit, but also gave Pritchard his due credit on how he prepares for a game for whenever his name gets called.

"I'm really happy for him. He's maintained a level of professionalism, preparation, and just toughness to just stay the course," Mazzulla said in his postgame comments. "Malcolm [Brogdon], Grant [Williams], Derrick [White], those guys, they did a great job tonight. I think we showed what our team can be, regardless if we're whole with our depth, our mindset, our toughness."

With the Celtics holding the league's best record at 31-12 plus, the team's aspirations to win a championship this season, Pritchard believes that the mentality of his teammates to always stay ready makes it that much easier to improve as a player.

"We're number one right now in the league. I know we've had some bumps in the road, but the bigger picture is: we're still number one, and it's a long season," Pritchard said. "It's just finding growth throughout the season to keep on getting better and better, and then once [we] hit that stride, you know, going into the playoffs, that's the most important time to be clicking."

The Celtics will look to win six in a row when they face the Charlotte Hornets (11-32) Saturday night.
Joel Pavón
Follow @Joe1_CSP