Marcus Smart (ankle) listed as out ahead of matchup vs. Knicks 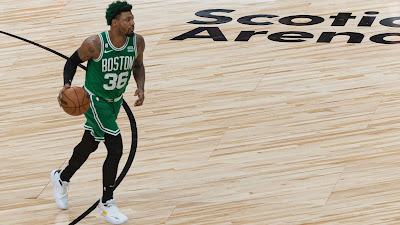 The Celtics will be without Marcus Smart for a third straight game, when they host the New York Knicks tomorrow night at TD Garden.
The veteran guard sustained a right ankle sprain in the team's 106-104 win over the Toronto Raptors this past Saturday. Smart sat out against the Orlando Magic and Miami Heat, which ended in two consecutive losses for the C's -- who prior were 7-0 on the second night of back-to-backs.

#NEBHInjuryReport for tomorrow vs. New York:

Boston was down three starters in their 98-95 loss to the Heat. Aside from Smart, Jaylen Brown (adductor tightness) and Al Horford (lower back soreness) sitting out, Malcolm Brogdon (personal reasons) also didn't play against Miami -- who was missing Jimmy Butler (back).
While Smart's status more than likely is still considered as "day-to-day," having three key players back in the rotation for Celtics interim coach Joe Mazzulla is a huge help against a young Knicks roster -- that even at 26-23, they're fighting to be a top-6 team in the East.
New York snapped a four-game skid with a much needed 105-103 victory over the Cleveland Cavaliers (29-20) Tuesday night, which was a battle between the current fifth and seventh seeds in the conference.
In the meantime, the Celtics look to get back on track when they face the Knicks at home Thursday night on TNT, following the announcement of the 2023 NBA All-Star starters during the 7:00 ET pre-game show.
Joel Pavón
Follow @Joe1_CSP