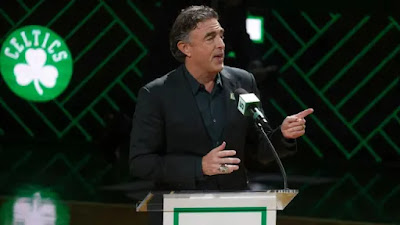 The future looks bright for the Celtics, who are fresh off a run all the way to Game 6 of the NBA Finals against the eventual champion Golden State Warriors.
As the NBA offseason is underway, the C's find themselves in good shape with the core of Jayson Tatum, Jaylen Brown, Marcus Smart and Robert Williams all under contract for the next few years, as they remain title contenders.
While the Celtics don't have much to spend this summer except the use of trade exceptions and mid-level exceptions come free agency, team co-owner and governor Wyc Grousbeck offered some thoughts on possible roster improvements.

"We are going to do everything we can to get banner 18 up there," Grousbeck said Tuesday afternoon on 98.5's Felger & Mazz. "Our first priority is winning. We got to put a roster together that has youth and expertise.

"You need your top eight guys, nine guys in the playoffs to take you all the way. We're going to make that strongest top nine that we can possibly make it. That's what Ime and Brad and everyone has agreed to, and that's what we're going to do."

Celtics president of basketball operations Brad Stevens is heading into his second offseason at the helm after a fairly successful first year of wheeling and dealing, so a major overhaul may be not needed, according to Grousbeck.

"We can't keep harping that our guys are younger -- we just need to go and win that thing," he said. "We're just trying to turn the page and build. I have a lot of confidence in these guys. The character of this team is very, very strong, and the desire is strong. We love the roster. We want to tweak it as opposed to blow it up obviously. So we're going to see if there are any tweaks that make sense. Continuity is clearly a good thing. We love our guys. We're just looking to add on."

Grousbeck, who put together a group of investors in late 2002 to purchase the Celtics, has maintained that his goal every year is to maximize winning.

"The reason that we bought the Celtics in the first place -- and I got 20 guys together to do it -- was so that we could vindicate, try to take care of this great thing much bigger than any of us that truly great people put together before us," Grousbeck explained. "We're trying to do everything we can for the Celtics. It's been that way since 2003. There's no question. Whatever needs to be done, can be done, can possibly be done.
"I've had four different in-person conversations with Brad and Ime [Udoka] in the last four days, and it's been: 'Let's go,'" said Grousbeck. "That's the way it'll be for as long as we have a team that can compete. We are really excited and can't wait to see what happens."

With the NBA Draft on Thursday night, it should be noted that the Celtics don't own a first-round pick but do have the 53rd pick in the second-round.