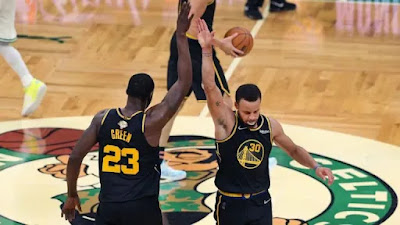 The Celtics missed an opportunity to take a 3-1 series lead Friday night, after falling to the Golden State Warriors 107-97 at TD Garden in Game 4.
Stephen Curry hit 7-of-14 from behind the arc to finish with 43 points on 14-of-26 overall shooting and 10 rebounds, as the NBA Finals are all tied up 2-2. Klay Thompson had 18 points, while Andrew Wiggins added 17 points and 16 rebounds for the Warriors, who are now 6-0 in the postseason following a loss.

"We had to do it the difficult way," said Celtics coach Ime Udoka to reporters. "We have to do it again. It could have been an easier road, obviously, if you get the win tonight. But we're 2-2 now. We know we can do it. We've done it before."

Jayson Tatum finished with 23 points (4-of-8 from 3), 11 rebounds and six assists. Jaylen Brown scored 21 points on 9-of-19 from the field. Marcus Smart had 18 points and Derrick White chipped in 16 points off the bench for the Celtics.
Boston led 54-49 at the break before the Warriors won their fourth straight third quarter, outscoring the C's 30-24. Curry scored 14 points in the period and made four 3-pointers to put Golden State ahead 79-78 going into the final frame.
Smart nailed a 3-pointer to give the Celtics a 94-90 advantage with over five minutes left to play, but missed their next six straight shots while Curry hit a floater and followed it with his seventh 3-ball of the night to give the Warriors a 100-94 advantage. Boston finally made a field goal at the 1:18 mark on a Al Horford top of the key 3 and they wouldn't score again. Golden State finished the game on a 17-3 run to steal Game 4.

"I felt like we just had to let everybody know that we were here tonight," Curry said in his postgame presser. "Whether that's their crowd, their team, our team, whoever wants to see that energy and that fire, we feed off of that."

The Celtics, who are 7-0 in the postseason after a loss, head back to the Chase Center for a pivotal Game 5, which will tip-off at 9:00 ET Monday night on ABC.
Robert Williams was seen limping in the second half and didn't play in the final minutes, as he finished with seven points on 3-of-3 from the floor, 12 rebounds (10 by halftime), four assists, two blocks and a steal in 31 minutes of action.