Ime Udoka on Celtics Game 1 win: 'we didn't play our best at all' 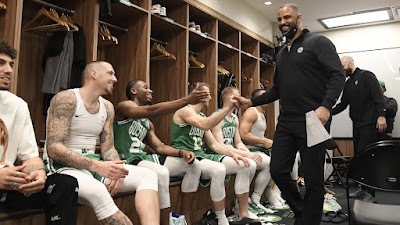 The Celtics pulled off a 120-108 comeback win over the Golden State Warriors in Game 1 of the NBA Finals.
What was Ime Udoka's message to his team after taking a 1-0 series lead?
They can definitely play better.
Despite the C's coach calling the fourth quarter a "confidence builder," it was the previous 12 minutes that was concerning, especially after leading at halftime.

Boston was able to weather a 21-point first quarter from Stephen Curry, who was 6-of-8 from deep, but was held scoreless in the second period. However, the Celtics trailed by as many as 15 to start the second half and were behind 92-80 heading into the final frame.
A barrage of 3-pointers from Jaylen Brown, Derrick White and Al Horford fueled a 40-16 comeback to steal homecourt advantage.

"Our switches were aggressive. At times, our bigger guys were getting caught too low, especially when Curry was getting going early, so we wanted to go with a smaller unit and get more aggressive on the ball," Udoka said in his postgame presser. "A lot of small-small. We did some pre-switching to keep our bigs out of the actions, took some time off the clock, and then, this is what we rely on all year: our one-on-one defense. Guys clamped in better, more physicality, more awareness on shooters and taking up some space. That seemed to wear them down a little bit."

In a game where Jayson Tatum was the only Celtic to struggle from the field (3-of-17 and 1-of-5 from behind the arc), the All-Star did finish with a postseason career-high 13 assists -- an NBA Finals record for a debut.

"Our last two series, we lost Game 1. This time of the season, you feel great when you win and you feel terrible after you lose. You got to be able to stay mellow, stay balanced, especially this early," Tatum said in his postgame comments. "It's far from over. It's just one game. We got to be ready for them to respond as if we would if we lost the first game."

The Celtics, who are three wins away from a championships, will have an opportunity to become just the third team in NBA Finals history to win the first two games on the road since the 1995 Houston Rockets. Game 2 from the Chase Center is scheduled for Sunday night, as ABC has the tip-off at 8:00 ET.