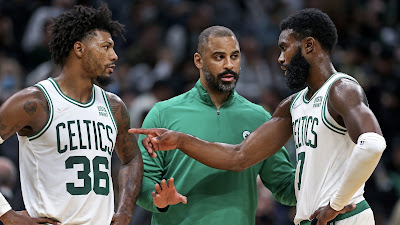 The Celtics are in the NBA Finals after a 12-year drought, but to say the journey to represent the Eastern Conference has not been an easy one would be an understatement ahead of their matchup with the Golden State Warriors.
In one of the biggest turnarounds in recent league history, the C's were 25-25 after the first 50 games of the 2021-22 campaign, only to finish the regular season 19-6 which bled into the playoffs via a four-game sweep of Kevin Durant, Kyrie Irving and the Brooklyn Nets in the first-round.
After eliminating the reigning NBA champion Milwaukee Bucks in the second-round and the Miami Heat in the East finals -- both series needing a seventh game -- many are still trying figure out when did the Celtics turn their season around and how did it occur rather quickly.
First year head coach Ime Udoka recently sat down with The Ringer's Jackie MacMullan and talked about the past nine months and while the Celtics skipper didn't exactly pinpoint when the roster flipped a switch, he did reveal how he handled one situation that became very public as one of the turning points during some early season struggles.
Following an ugly loss to the Chicago Bulls back in November, Marcus Smart took it upon himself during his postgame presser to call out Jayson Tatum and Jaylen Brown about not passing the ball.

While Udoka wasn't annoyed by the actual comment, in fact nothing that was said hadn't already been repeated in the locker room before -- per the Celtics coach -- the issue was Smart criticized Tatum and Brown publicly and he told him to fix it.

"It was nothing I hadn't said behind closed doors," Udoka said in MacMullan's piece. "But in this case, it was a player saying it publicly. And what Marcus was saying in that particular game was totally invalid. Jayson and Jaylen were drawing a lot of doubles and were making the correct pass each time -- including to Marcus -- who couldn't make a shot that night."

Essentially Udoka, who has been pretty straight forward and honest since the moment he was introduced as the Celtics new coach, let Smart know he wasn't going to clean up his mess.

Meanwhile, the media ran with their own interpretation of those events and what followed was an abysmal 1-4 road trip to start the month of December and it didn't help matters much when it came to those who questioned the Celtics' chemistry -- which had been a hot topic since the Eastern Conference Finals locker room blowup in the Disney bubble back during 2020 playoffs.
But according to C's assistant coach and former point guard Damon Stoudamire, that incident opened up a long overdue dialogue that had been brewing with the team's young core for some time.

"We sat down as a team and got it all out there," Stoudamire said. "Marcus made a statement, then the other guys said, 'OK, we hear what you are saying, but you need to be accountable too. You gotta take better care of the ball.'"

Whether this took place during the infamous "players-only meeting" soon after Smart's comments is still unknown. However Udoka did call out his roster -- who were 11th in the East standings at the time -- after an early January loss to the New York Knicks, where they blew a 25-point lead and were beaten on a RJ Barrett shot at the buzzer. The Celtics coach said his team lacked mental toughness during which he called the lowest point of the season.
It took a while but less than a month later at the trade deadline, Derrick White and Daniel Theis were brought in while Dennis Schroder, Josh Richardson, Romeo Langford, Enes Kanter and Bruno Fernando were shipped out and defense became a focal point that day going forward. The Celtics would end up winning 28 of their last 35 games and they haven't lost two in a row since.
With the road to the Finals obviously not being a smooth one to say the least for the Celtics, but it's one Udoka and his roster are definitely proud to call their own, especially if they end up hoisting the Larry O'Brien trophy within the next two and half weeks.
Game 1 of the NBA Finals between Boston and the Warriors will tip-off Thursday night at 9:00 ET on ABC.