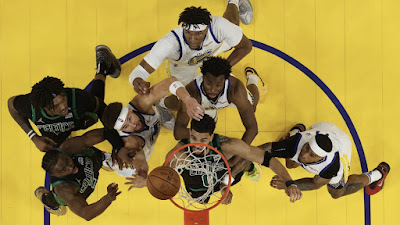 There's one thing many can't question when it comes to this current Celtics roster and that's their confidence, despite losing 104-94 in Game 5 Monday night to the Golden State Warriors.
Just ask Jayson Tatum, who finished with 27 points and 10 rebounds, if he believes his teammates' confidence has wavered as Boston now trails 3-2 in the NBA Finals and facing elimination.

"You better be confident, right?" Tatum said Wednesday after practice. "We ain't got to win two in one day. We just got to win one game on Thursday. We've been in this situation before. So it's not over. Got to win on Thursday."

Still, the Celtics had an opportunity to take a 3-1 strangle hold on this series in Game 4, in which Stephen Curry went off for 43 points, as the C's failed to get it done at home and then followed that up with another fourth quarter meltdown at the Chase Center -- losing back-to-back games for the first time this postseason after previously going 7-0.
Boston has already been in this same position three other times prior during this playoff run. They trailed 3-2 to the Milwaukee Bucks and went on to win the next two games to advance to the Eastern Conference Finals. Against the Miami Heat the C's went to seven games after being up 3-2 and won in a winner-take-all to make it to the NBA Finals.
The Celtics find themselves in a must win situation once again, but this time around against a core that has won three championships in five years when it comes to the Warriors

"We have to look each other in the eye now. Our backs are up against the wall," said Robert Williams during his post-practice comments.

While their defense had been a huge part of the Celtics' success, their careless turnovers have been one of the main scapegoats in games they have lost by averaging a whopping 16.8 per contest in the playoffs. In games they have won, turnovers have been limited to 12.8. In Game 5 they turned the ball over 18 times which led to 22 points for Golden State.
As the series has progressed it seems like the Warriors have been ready to take advantage of the Celtics' mistakes, especially when it comes to not taking care of the ball.

"[We're] almost playing into their hands, some of the things they want us to do, which is taking contested midrange shots and probably play a little faster than we want at times," said veteran Al Horford during his post-practice presser Wednesday. "I feel like that's part of the reason our offense hasn't been clicking like it needs to be."

As the Celtics look for answers to bounce back in Game 6 at home, they may also not want to fall victim to frustrations due to officiating, as the team continues to complain and argue over calls -- "Probably something we shouldn't do as much, and we all did too much," said first year coach Ime Udoka.
But if there's any indication that the pressure is on for Boston, Jaylen Brown made it abundantly clear that they are not afraid of the moment leading up to the biggest game of their season.

"We are not scared. We do not fear the Golden State Warriors. We want to come out and play the best version of basketball that we can," Brown said to reporters.

Game 6 is scheduled for Thursday night, ABC has the tip-off at 9:00 ET from TD Garden.
Joel Pavón
Follow @Joe1_CSP