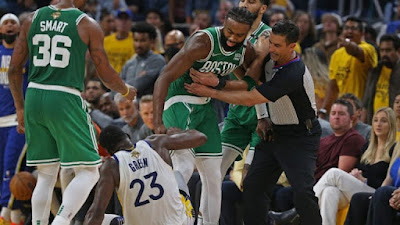 The physicality between the Celtics and Golden State Warriors was turned up to another level in Game 2 of the NBA Finals Sunday night.
Obviously the most notable altercation came during the closing seconds of the first half. C's All-Star Jaylen Brown was attempting a 3-pointer, which would have put his team ahead 51-55 with 55 seconds remaining if he made it, before being fouled by Warriors forward Draymond Green.
Both players fell to the floor, while Green's legs hit Brown in the mid-section and almost near his face. Brown flung Green's legs aside and Green pushed Brown in the back. Brown quickly got up and looked looked down to respond to Green saying "don't do that" a few times before Jayson Tatum and referee Zach Zarba pulled him back.

Draymond Green and Jaylen Brown had to be separated after this interaction. pic.twitter.com/pyEdSepMjV

Brown believes that Green, who already had a technical foul prior to the dust-up, and the Warriors got the benefit of calls made in Game 2.

"On that situation, Draymond fouled me on a three and put his legs on my head or whatever. I tried to get up," Brown said during his postgame presser. "But that's what they're going to do. That's what he's going to do. He's going to try to muck the game up, try to raise the level of intensity. We've got to raise ours. I feel like they got away with a lot tonight, but we've got to come ready to play, come ready to meet that physicality on both ends."

Outside of the foul being called on Green, the officials reviewed the play for any unsportsmanlike conduct, because Green had picked up a technical in the first quarter and a another technical foul call would've gotten him ejected from the game.
Still, Brown says he was not trying to bait Green into another technical during that back and forth, but does believe Green made an unsportsmanlike play at the end of the day.

"That's what Draymond Green does. He'll do whatever it takes to win. He'll pull you, he'll grab you, he'll try to muck the game up because that's what he does for their team. It's nothing to be surprised about. Nothing I'm surprised about. He raised his physicality to try to stop us and we've got to raise ours. Looking forward to the challenge."

The play was ruled a common foul and no second technical was given to Green, who had his own take, following the Warriors 107-88 win in Game 2 to even up the series 1-1.

"It's the NBA Finals. Like I said, I wear my badge of honor," Green said during his postgame comments on ESPN. "It's not that I'm saying they necessarily treat me different. I've earned differential treatment. I enjoy that. I embrace that."

Brown also dealt with some early frustration when he picked up his second foul late in the first quarter on a questionable foul when Gary Payton II went up for a layup attempt. The Celtics wing had scored 13 points to open the game prior to the call being made.

"Yeah, I was just being aggressive to start the game, feeling great," Brown said. 'I got a call, I guess in the first half, that put me on the sideline. I don't feel like I touched Gary Payton and I expressed that, but they called the foul on me. That sat me down. Can’t let that be the reason why in the second half I wasn't able to be as effective, but definitely changed the game with that phantom call."

Despite Brown only making 1-of-11 shots for the rest of the game following that call to finish with 17 points on 5-of-17 overall from the field, the veteran says he didn't let the incident with Green affect him much.

"It's the NBA Finals. You come to play basketball," Brown said. "I know what Draymond is going to do. I know what he's going to try to do. They switched the lineup. They tried to put him on me, be physical, muck the game up, pull me, grab me and overall raise the intensity."

The Warriors used a 35-14 third quarter to essentially put away the Celtics, who were held to 37.5% shooting from the field. As the series shifts to Boston for Game 3 and 4, Brown says while the Warriors may have gotten away with things in Game 2, the C's have to look forward to the challenge of being the better team.

"All that stuff, the gimmicks, the tricks, we've just got to be the smarter team, be the more physical team," Brown said. "Look forward to just coming out and playing Celtic basketball."

Game 3 is scheduled for Wednesday night at TD Garden with a 9:00 ET tip-off on ABC.
Joel Pavón
Follow @Joe1_CSP