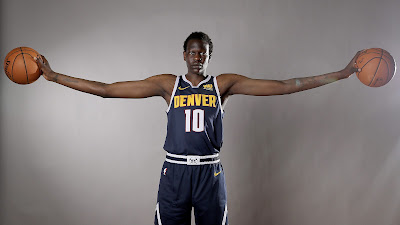 The Celtics are reportedly making a three-team trade with the Denver Nuggets and San Antonio Spurs, according to ESPN's Adrian Wojnarowski.
The deal involves Boston sending Juancho Hernangomez to the Spurs and they'll receive both Bol Bol and PJ Dozier from the Nuggets, while San Antonio sends Bryn Forbes to Denver. The Celtics will be able to absorb the extra player after waiving Jabari Parker earlier this month.


Bol, at 7-foot-2, was traded just last week to the Detroit Pistons before the deal was voided due to the center failing his physical. Ultimately, Bol had decided to get surgery on his injured foot that could sideline him 8-to-12 weeks.
Dozier, who played for the Celtics briefly during the 2018-19 campaign, is also out indefinitely. The 25-year old guard tore his ACL at the start of the season.
Boston will save about roughly $3 million in salary by shedding Hernangomez's contract, as they also sent $2.15 million to the Spurs in the deal -- which will help get them below the tax line.
While they are no immediate plans for the Celtics to waive either player, per Woj, Bol could still return this season and the team owns the Bird Rights on both.
Dozier is a free agent this summer and Bol has a qualifying offer for next season, but they could also be traded again before next month's deadline, just not together or combined with any other salaries in potential future deals.
Joel Pavón
Follow @Joe1_CSP