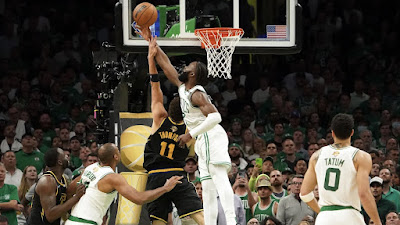 The Celtics bounced back from a horrible Game 2 loss to beat the Golden State Warriors 116-100 and take a 2-1 series lead in the return of the NBA Finals at TD Garden Wednesday night.
Jaylen Brown set the tone early when he dropped 17 of his 27 points in the first quarter, to finish overall 9-of-16 from the field, including 4-of-8 from 3-point land, to go along with nine rebounds, five assists and a block. Jayson Tatum netted 26 points and handed out nine assists in the Game 3 win.
Marcus Smart added 24 points, five assists, while Al Horford chipped in 11 points, eight rebounds and six assists for the Celtics, who have improved to 6-4 at home and haven't lost two in a row since March.

"Game 2, they brought the heat to us," Smart said in his postgame presser. "For us, that left a bad taste in our mouth because what we hang our hat on is effort on the defensive end and being a physical team. It definitely woke us up a little bit."

Stephen Curry led all scorers with 31 points on 12-of-22 from the floor and 6-of-11 from deep. Klay Thompson had 25 points and Andrew Wiggins contributed with 18 points for Golden State.
Boston led 33-22 after the first quarter, holding the Warriors to 8-of-23 from the field, before going up by as much as 18 and taking a 68-56 advantage into the break -- while shooting 27-of-47 (57%) overall, including going 8-of-18 from behind the arc.
Golden State had another great third quarter and not only cut their deficit but took a one-point lead (83-82) following a four-point play by Curry -- when he drew a flagrant 1 foul on Horford -- and a 3-pointer by Otto Porter Jr. But the C's immediately responded with a 11-6 spurt to end the period.
With an 93-89 edge heading into the final frame, the Celtics used a 23-11 run to put away the Warriors for good and are now two wins away from an NBA championship; their first in 14 years.

"I think that's when we are at our best when we respond to tough situations. We respond to teams going on runs and things like that," Tatum said during his postgame comments. "I think we did that several times tonight."

Brown and Tatum are the first duo in Celtics history to each make 50 3-pointers in a single postseason.
Boston limited their turnovers from 18 in their Game 2 loss on Sunday to 12 in Game 3, while also outrebounding the Warriors 47-31 (15-6 on the offensive glass) and outscoring them in the paint 52-23.

"We talked about it quite a bit, our group being resilient and being able to fight through a lot of things and at times when it's most needed being able to lock down on defense," Celtics coach Ime Udoka said. "We did in the fourth quarter."

Robert Williams was very active on both ends of floor in probably his best performance of the series, putting up eight points, 10 rebounds, four blocks and three steals in 26 minutes of action.
In the previous 39 times, teams who have split the first two games in the finals, the winner of Game 3 has gone on to win the series. Game 4 is scheduled for Friday night in Boston, as ABC will have the tip-off at 9:00 ET.