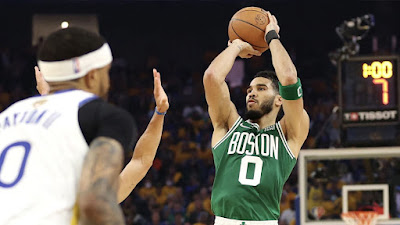 The Celtics came apart at the seams in the third quarter of Game 2, as they fell to the Golden State Warriors 107-88 Sunday night at the Chase Center and the NBA Finals are all tied up 1-1.
Jayson Tatum had a bounced back game offensively from his Game 1 performance of 3-of-17 with 28 points in 8-of-19 from the field and 6-of-9 from deep. But, there wasn't much else going for the C's outside of Jaylen Brown's 17 points (5-of-17 from floor) and Derrick White chipping in 12 (4-of-13) off the bench.
It didn't help matters much for Boston, who also coughed up 18 turnovers that were converted into 33 points for the Warriors in a 19-point loss.

"It's just kind of as simple as we've just got to take care of the ball," said Tatum in his postgame presser. "We've done it, and we're a really good team when we take care of the ball. But we have those lapses where -- snowball effect -- we pile on turnovers and dig ourselves into a hole."

The duo of Marcus Smart and Al Horford -- who together put up 44 points in last Thursday's Game 1 victory -- only managed to score two points apiece on a combined 2-of-10 shooting in Game 2.
Stephen Curry led all scorers with 29 points on 5-of-12 from behind the arc, while Jordan Poole added 17 points off the bench for the Golden State, who are now 10-1 at home in the postseason.
Boston trailed 52-50 at the half, before being outscored 35-14 in the third period, while the Warriors held them to 4-of-17 from the field, including 2-of-8 from 3.
Golden State used a 19-2 run to close the quarter and take a 87-64 advantage into the final frame. The Celtics' deficit was as much as 29 points, as the starters were subbed out with 10:45 left to play.

"It is what it is," said Horford during his postgame comments. "Onto to Game 3 and I can't wait for the Garden because I know it's going to be rocking."

This best-of-7 series will shift to Boston with Game 3 scheduled for Wednesday night at 9:00 ET on ABC from TD Garden.