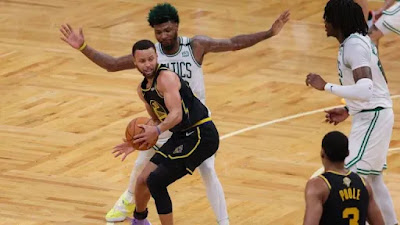 The Celtics simply couldn't score, missing six straight shots (mostly 3-point attempts) during a four-minute stretch, while only trailing 97-94 in the final frame of the Game 4 at TD Garden, as they failed to take a commanding 3-1 series lead.
The Golden State Warriors on the back of Stephen Curry, who hit a floater in the lane and a dagger 3-pointer (1:42 mark) -- his seventh of the night -- as part off 17-3 run to put Boston away for good, in a 107-97 victory to even the NBA Finals at two games apiece.

"We had our opportunities tonight, especially when we did have a 5-6 point lead. It felt like we didn't have our best possessions and kind of let them back in the game whether it was turnovers or poor offense," Ime Udoka said in his postgame presser.

"It's been our whole season, especially this postseason. We've gad to do it the difficult way. We've been battle tested throughout some series (with) Milwaukee and Miami and have to do it again. It could have been an easier road obviously if he got the win tonight, but it is what it is. We're 2-2 now, we know we can do it, keep your head up, and let’s get one on the road."

Boston now heads back to the Chase Center for a pivotal Game 5 with the series tied, which now becomes a best-of-3.

While both teams have remained undefeated in the postseason following a loss (Celtics at 7-0, compared to the Warriors at 6-0), the C's gave up 16 offensive rebounds that turned into 19 second chance points for Golden State. Plus, 16 turnovers were also converted into another 19 points for the Dubs.

"We don't do this shit on purpose. I promise you we don't. We trying as hard as we can. There are certain things we got to clean up (like) turnovers, movement on the offensive end," Jayson Tatum said after going 2-of-9 and giving up two turnovers in the second half.
"Would we have liked to have won today and be up 3-1? That would have been best case scenario, but it's The Finals and in the art of competition, they came here feeling like they had to win. It wasn't easy. That's kind of the beauty of it. It's not going to be easy and it shouldn't be. We both want it and we got to take it."

Despite the Celtics blowing a golden opportunity to not only win two in a row, but put a strangle hold on the NBA Finals, this roster definitely doesn't lack any confidence. For a team that hasn't lost a back-to-back game since January 21 when healthy, its time to prove once again what is it that got them to this big stage in the first place.

"Just be who we are. It's all we can do. Control what you can control. Tonight is over. We got to turn around and get right back to it Monday. That's how we've been all year. We take a loss and we bounce back. It's who we are and who we're going to continue to be," Marcus Smart said to reporters. "It's a very important game on Monday."