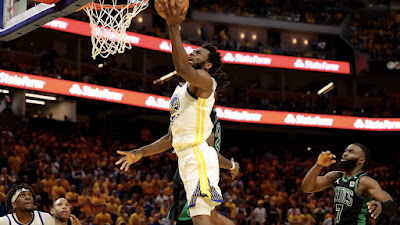 It was another fourth quarter meltdown for the Celtics, as they fell to the Golden State Warriors 104-94 Monday night at the Chase Center in Game 5.
Jayson Tatum had 27 points on 10-of-20 from the field, including 5-of-9 from 3-point territory, to go along with 10 rebounds and four turnovers. Marcus Smart added 20 points, while Jaylen Brown chipped in 18 points on 5-of-18 shooting and 0-of-5 from deep for the Celtics, who lost back-to-back games for the first time this postseason after previously going 7-0.
Andrew Wiggins came through once again for the Warriors, finishing with a team-high 26 points and 13 rebounds, notching his second straight double-double following a great showing Friday night in Boston.
The first time All-Star stepped up for teammate Stephen Curry, who struggled offensively by going 0-of-9 from 3-point land -- the first time since 2018 he didn't make a single 3-pointer -- to tally only 16 points on 7-of-22 from the floor in a follow up to his 43-point performance in Game 4.
The 3-point king's streak of 132 straight games in the postseason (league record) with at least one 3 ended, along with his NBA-best of 233 consecutive games with a made 3 in the regular season or playoffs combined.
Klay Thompson had 21 points, while Gary Payton II contributed with 15 points and Jordan Poole netted 14 off the bench for Golden State, who now have a 3-2 lead in the NBA Finals and are on the cusp of winning their fourth championship in eight years.
The Warriors jumped ahead 24-8 to open up the first quarter, the largest margin of the night out of the gate.
Tatum finally made a 3-point field goal at the 4:34 mark in the second period after the C's missed their initial 12 attempts from 3. Despite a 16-point deficit and being down 51-39 at the break, they made eight straight 3s and used a 22-6 run to start the second half to grab a five-point lead. But Golden State outscored the Celtics 18-13 the rest of the quarter, which included a go-ahead 38-foot bank shot 3-ball from Poole at the buzzer to give the Warriors a 75-74 advantage heading into the final frame.

"When we're at our best, it's simple ball movement. I think the third quarter showed that. The drive and kick was beautiful, was working, getting guys wide-open shots," coach Ime Udoka said about his team's 35-point outburst in the third.

An 18-5 spurt by Golden State in the fourth essentially put away the Celtics, who now face elimination after committing 18 turnovers that were converted into 22 points.

"Definitely we weren't as sharp as we needed to be during times there. Just tough," Al Horford said in his postgame presser. "Definitely now, our backs are against the wall, and we have to see what we're made of."

Game 6 is scheduled for Thursday night at TD Garden with a 9:00 ET tip-off, as the Celtics look to force a winner-take-all Game 7, which would be Sunday back in San Francisco.